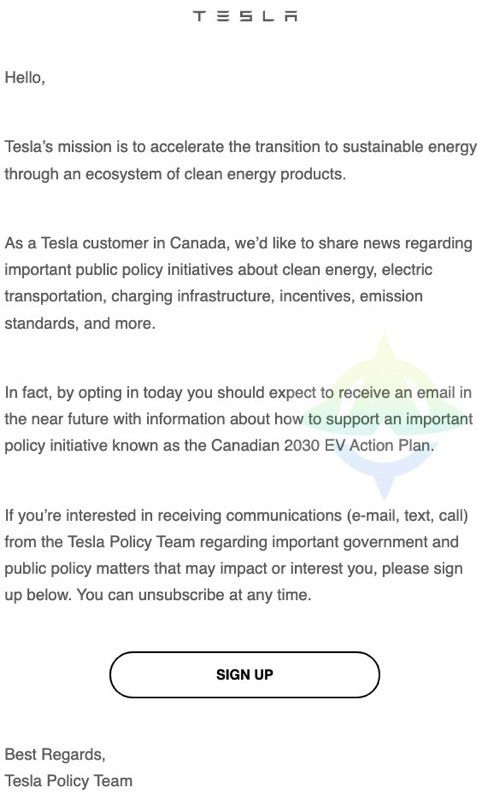 Tesla has notified its owners in Canada on Wednesday to sign up for future updates about important public policy initiatives about clean energy, electric transportation, charging infrastructure, incentives, emission standards, and more, according to the email obtained by Tesla North.

“In fact, by opting in today you should expect to receive an email in the near future with information about how to support an important policy initiative known as the Canadian 2030 EV Action Plan,” details the Tesla Policy Team.

Earlier this month, Electric Mobility Canada (EMC) announced its 2030 EV Action Plan, which advocates for 100% electric vehicle sales in Canada by 2030. Tesla is listed as a supporter of the initiative, along with other electric automakers such as Rivian, Lion Electric, and other notable electric and clean energy groups and organizations.

“Canada can and should reach 100% electric passenger vehicle sales by 2030 in support of Canada’s economic, environmental and public health goals. For all other vehicles, the same should be achieved by 2040 at the latest. Achieving this will create thousands of new jobs, secure Canadian global EV manufacturing leadership, improve public health, and significantly reduce carbon pollution,” explains EMC.

Tesla’s email reiterated its mission is to “accelerate the transition to sustainable energy through an ecosystem of clean energy products.”

Just yesterday, Tesla increased the price of its Model 3 and Model Y vehicles in Canada. The price increase on the entry Model 3 no longer makes it eligible for federal and BC provincial rebates.