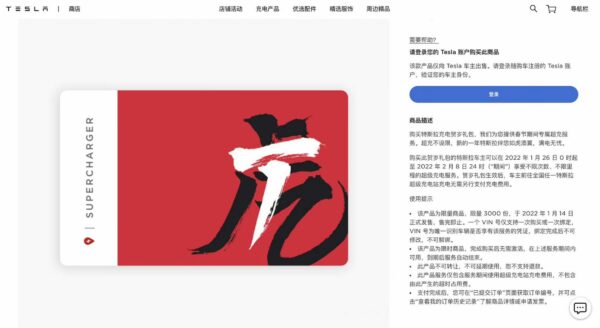 As Lunar New Year celebrations approach in China, Tesla has revealed a premium charging package through its site for those who are planning to travel for the holiday.

Tesla has unveiled a Supercharging New Year Gift Package in China, priced at ¥426 ($67 USD) and offering unlimited mileage and Supercharging (via @42how_).

The package runs during the Lunar New Year and surrounding days, offering unlimited Supercharging and mileage from January 26 to February 8.

From Jan 26 to Feb 8 period can be unlimited mileage and unlimited Tesla supercharging. Very cost-effective if your journey requires many charging usage. #Tesla $TSLA pic.twitter.com/4ToBWfTZ1l

Tesla has over 8,000 Supercharger stalls across mainland China as of November, and that number has likely increased significantly since then.

Last year, Tesla’s Lunar New Year celebrations subtly included the anagram “S3XY,” which represents the names of each of its models next to each other: Model S, 3, X and Y.

In December, Tesla sold a record 70,847 cars in China, even beating out the super-affordable HongGuang Wuling Mini EV.

The Tesla Model Y was China’s best-selling electric SUV in 2021, and recent owner’s manuals for Shanghai-built Model Y units are showing the addition of trunk hooks for stowing cargo.

Tesla also increased the prices for both its Model Y and Model 3 units at the end of last month, though it’s not likely to slow down the company’s immense demand in the country.