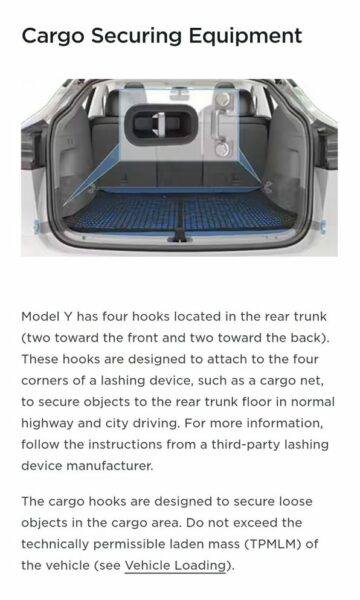 The Tesla Model Y became China’s best-selling electric SUV in 2021, and one Tesla enthusiast has recently pointed out a few new additions to the electric vehicle’s (EV’s) trunk, according to the owner’s manual.

Tesla’s Shanghai-built Model Y owner’s manual now shows the addition of four hooks to secure loose items in the trunk, as well as the parcel shelf to conceal any items, as reported by @Tesla_Adri.

Neither part is included in the North American manual, as Tesla_Adri points out, and it’s unclear when or if it will be updated for future models.

The hooks in the Model Y trunk feature two hooks near the front and two near the back and are designed particularly for a lashing device like a cargo net, as the manual explains.

The Model Y’s parcel shelf is simply a layer that covers the trunk’s cargo so it can’t be seen from outside the vehicle, effectively protecting items from the sun, thieves or simply reducing noise for rustling items. This was added back in November of last year, yet another exclusive feature for the Model Y first debuting in China, like AMD Ryzen hardware.