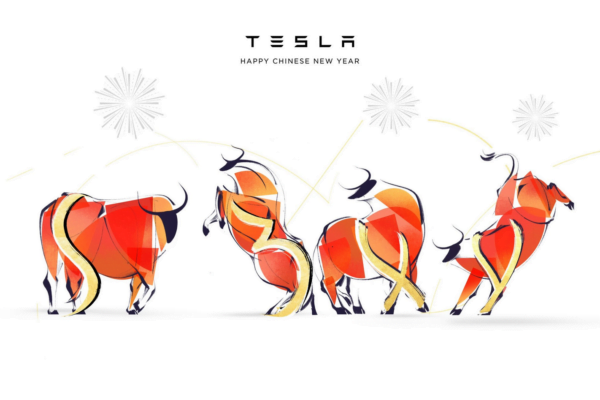 They’re celebrating Lunar New Year today in China, and as a result, Tesla’s Gigafactory Shanghai is closed until Monday.

In a pair of tweets Friday, Tesla CEO Elon Musk wished onlookers a happy Chinese New Year in what is the Year of the Ox, both with artwork of oxen spelling out Tesla’s favorite word, “S3XY” – which signifies the company’s four currently-released vehicles; the Model S, the Model 3, the Model X, and the Model Y.

Following one of the tweets, Musk wrote, “Congratulations Tesla China for amazing execution last year. Now on to the next for even more!!”

To say that Tesla had a stellar 2020 – the Lunar Year of the Rat – would be an understatement. The company made up 16% of the total EV market last year, and it sold the most cars worldwide by far, even reaching half a million cars sold by the end of December.

Recently, Musk and Tesla also made a $1.5 billion investment into Bitcoin, a move which was later criticized for its environmental impact, seemingly in contrast with Tesla’s goals as a company.

In any case, this year’s Lunar New Year rings in the year of the Metal Ox, with a particular emphasis on industries relating to metal elements. And if that means anything for the EV industry, we’re likely about to see a very exciting year, with a number of new technologies.