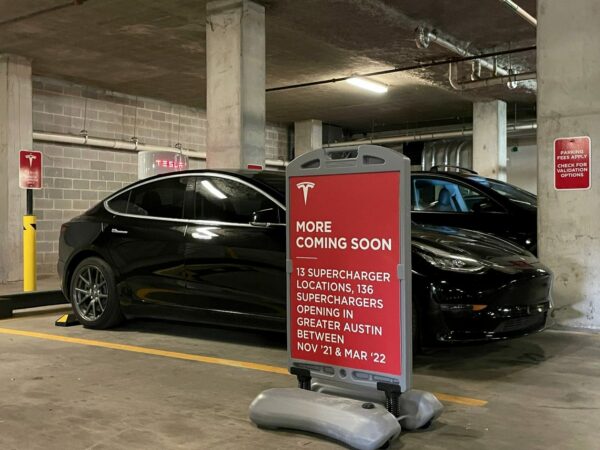 Although Tesla drastically expands its Supercharger network on an ongoing basis, new charging sites are still a warm welcome for most Tesla users amidst increasing electric vehicle (EV) popularity.

Tesla is currently adding a total of 136 new Superchargers between November and March of 2022, according to a post from @CYB3RTX, who spotted a number of the sites under construction around the city.

Those that @CYB3RTX noticed were located in Austin’s South Congress (SoCo) region, in addition to another one spotted at a Target location on toll road 290.

Breaking: Austin Texas to have 136 new Superchargers opening between (Nov-21 March-22) Stopped at the new SoCo location today and then saw another under construction at the Target on 290.🔋🤖🚘🤗@WholeMarsBlog @elonmusk pic.twitter.com/FkUORDghY0

The news comes as Tesla prepares to open its Supercharger network to non-Tesla brands, which Tesla has already modified in the Netherlands.

Year over year in the third quarter, Tesla’s Supercharger stations increased 49 percent. Tesla also reached a milestone of 30,000 Superchargers across the world, with several more still yet to come in the coming years.

Unfortunately, Texas Tesla buyers must still have their vehicles shipped outside of the state before taking delivery, due to the state’s odd prohibition laws against direct auto sales.