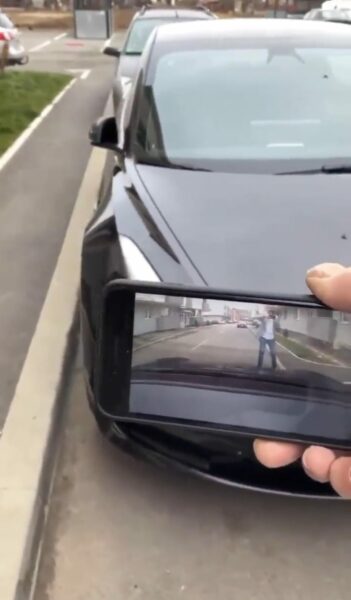 After Tesla’s software update 2021.36.8 brought Live Camera Access Sentry Mode to drivers in the U.S., the feature has yet to expand outside of the automaker’s home country.

One user in Europe created their own Tesla’s Sentry Live Camera Access Mode using a third-party dashcam, as depicted in a video shared on Monday by @Sawyer Merritt.

The video depicts @NicoloTesla, a resident of Romania, testing his homemade feature with his phone while standing in front of a Tesla Model 3.

According to Nicolo, he is calling this a “sentry live solution”, noting he is able to watch his Tesla live remotely 24/7 without interruption.

Guys is not a simple dashcam! Is a sentry live solution! I can watching my tesla live in remote from anywhere 24h a day 7 days a week whit out interuption, is a by-passed from the front camera, the source code is from sentry (main source front camera. In Romania works well 👍🇷🇴

Tesla has also limited the Live Access Sentry Mode to 90 minutes per day for users, as discovered by one user that reached the full period before the feature timed out.

Earlier this year, a band also used Tesla Sentry Mode from a variety of Tesla vehicles found in the wild to film a music video for themselves.

A setting for the live access streaming feature was initially discovered last December, hinting at the remote camera access feature.

The recent update also allows Tesla drivers with an external speaker to talk through their car speaker, which Tesla CEO Elon Musk went on to say was “great for practical jokes.”

Tesla has announced it will be removing ultrasonic sensors from its vehicles, the next step of its camera-based Tesla Vision Autopilot. “Today, we are taking the next step in Tesla Vision by removing ultrasonic sensors (USS) from Model 3 and Model Y. We will continue this rollout with Model 3 and Model Y, globally, over […]
Sarah Lee-Jones
11 mins ago