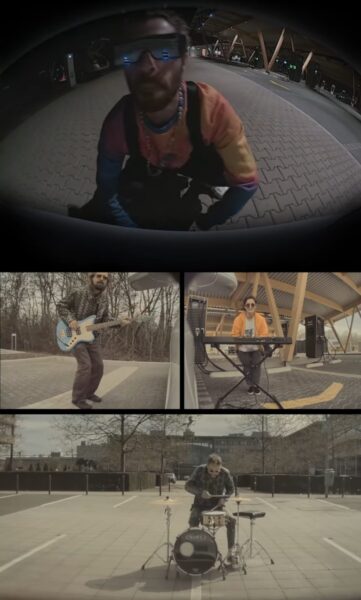 Tesla’s Sentry Mode has helped owners catch criminals, but in a new update from the system, one group of musicians has officially used the technology to film a music video.

Earlier this month, Germany-based Autojohn uploaded a music video that was shot on the Sentry Modes of Tesla vehicles owned by random owners. While out traveling around, the team would simply approach random Teslas in the wild and perform for the video, then they would leave a note with a URL at which the owners could upload the footage.

To the crew’s surprise, many of the owners not only checked the recordings, but many of them also uploaded the footage capture by their vehicle’s Sentry Mode. The music video features keyboard, drums, vocals, and bass, and has been arranged top-to-bottom in a portrait/phone-style framing.

The video takes place at a wide variety of locations, including multiple electric vehicle (EV) charging stations, an open field, and other random locations around a city.

Recently, one hacker discovered an “allow remote camera access” setting in Tesla’s Sentry Mode settings, which would not only be super useful for Tesla owners, but also would make it even easier than using the car’s cameras to make a music video.

You can watch the full music video, as created with Teslas from strangers below.

Take a look at all of the new Tesla Superchargers that went live across the globe this past week, courtesy of data from Supercharge.info and the TMC Forums: Date Opened Location Number of Stalls Power Rating Official Listing September 26, 2022 2 Rua do Miradoiro, Vigo, Pontevedra, Spain 12 250 kW Tesla September 26, 2022 Strevelinsvej 13, […]
Nehal Malik
3 hours ago

As China celebrates its legal holiday of National Day this week, Tesla’s Gigafactory Shanghai will stay open with some added benefits for employees who work for the holiday. Tesla’s Giga Shanghai is remaining operational during China’s National Day holiday running from October 1 to 7, as reported by a source familiar with the matter reporting […]
Peter McGuthrie
11 hours ago

Tesla is looking to expand Gigafactory Nevada after years of announcing plans to do so, according to sources familiar with the matter reporting to electrek. Past statements by Tesla held that the Giga Nevada location would be able to produce around 105 GWh of battery cells per year and 150 GWh of battery packs per […]
Peter McGuthrie
12 hours ago