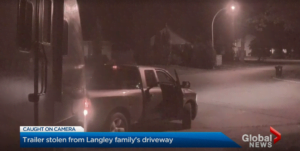 In the modern age, thieves are getting smarter by the day, making it tough to protect your assets. However, one Canadian family’s electric vehicle (EV) helped them recover their lost goods.

According to Global News BC, a Langley family’s Tesla caught video of thieves stealing their RV out of their driveway on Thursday. One member of the family who declined to be identified got up at 6 am to find the RV missing from the family’s driveway.

The man told Global News, “It was like waking up out of a dream, I wasn’t sure at first.” He continued, “I kind of saw nothing and couldn’t remember: did I actually bring it home? Am I waking up here? And 10 seconds later it hit me that it was actually gone.”

"It was like waking up out of a dream, I wasn't sure at first, I kind of saw nothing and couldn't remember did I actually bring it home … and 10 seconds later it hit me that it was actually gone."https://t.co/eHBSs3W7Gf

Luckily, the family’s Tesla captured the whole thing with its motion-activated camera system known as Sentry Mode. The clip began with a man riding into the court on his bicycle, then turning around and leaving, only to be followed by a truck. The truck backed into the driveway, and thieves spent only two minutes before driving away with the RV.

The trailer was recovered by police later Thursday, thanks to the video captured by the family’s Tesla. It will remain with police as evidence for a few weeks before being returned to its rightful owners.

Tesla Deliveries Up in Germany, Every Other Brand Way Down