Tesla FSD Beta 10.3 Put to the Test in Canada by an American [VIDEOS] 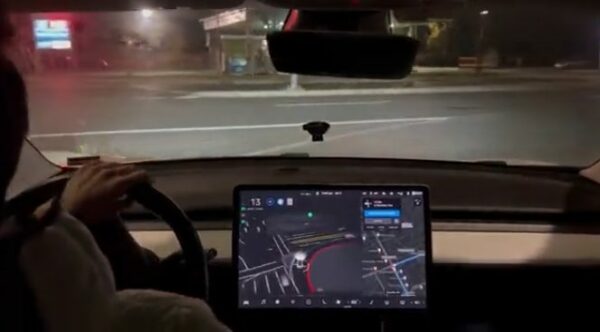 Tesla’s Full Self-Driving (FSD) beta 10.4 is set to drop for users with safety scores of 98 and up on November 5, according to Tesla head Elon Musk, and meanwhile, users all over North America are sharing their experiences with the technology.

On Thursday, @JeffTutorials shared new videos of some Tesla FSD beta 10.3 testing in Canada, showing one particular yielding right turn that was successful. In the short videos, the Tesla gets into a right-hand lane at a red light with a yield sign, creeping up very slowly, then accelerating upon sensing that there were no cars coming.

Here are some other FSD beta 10.3 tests in Canada, where the system wasn’t too good:

Roundabout fail from last night on FSD Beta in Canada.

This is why all beta testers should be prepared to take over at all times, especially complicated scenerios like this!

Not the best performance, but at least it tried! 👏 pic.twitter.com/ZmFqbl3ige

The news comes amidst an ongoing update rollout for Tesla’s FSD beta users, slowly descending from perfect safety scores to those with 99, then 98, and so on, to be tested on public roads.

Earlier this month, Tesla responded to an ongoing investigation from the National Highway Traffic Safety Administration (NHTSA) over its Autopilot system, and was asked by the agency to follow up with some answers about its FSD technology.

Tesla was also asked by the National Transportation Safety Board (NTSB) to limit where users can test the software, though the agency has no regulatory power – only investigative, and in the wake of accidents.

Tesla has increased delivery wait times for all models except the entry-level Model Y in China to 4-8 weeks — reports CnEVPost. The move is in stark contrast with delivery timeline changes made by Tesla in recent weeks, which cut wait times down significantly. For some models, Tesla managed to bring delivery times down to […]
Nehal Malik
5 hours ago

If you’re planning to finance your next Tesla purchase in the United States, rates have increased to kick off the fourth quarter. As noted by Waiting4Tesla.com (@w4tsla), financing rates for Model S/X and Model 3/Y on the Tesla website in the U.S. have increased 0.25%, now showing as 4.74% (previously 4.49%). Tesla partners with major […]
Sarah Lee-Jones
9 hours ago

Tesla on Friday held its annual AI Day event to showcase the company’s latest leaps in Artificial Intelligence, automation, and computation. The event kicked off with Tesla showing off the first working prototype of ‘Optimus,’ the long-awaited Tesla Bot. Despite merely being a prototype, Optimus was able to walk out on stage, wave to the […]
Nehal Malik
11 hours ago