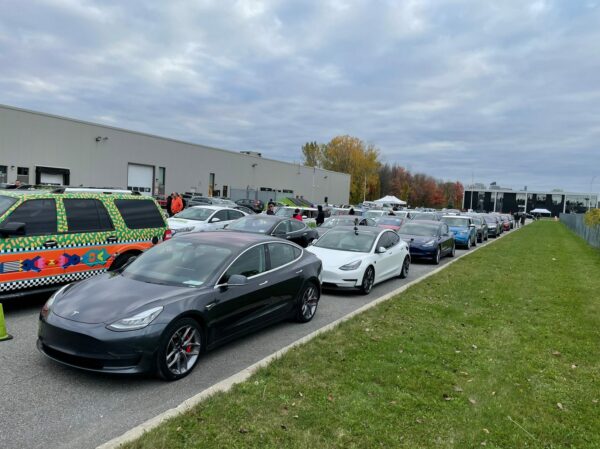 After a record was set for the longest Tesla parade in Atlanta, Georgia last year, a new group has officially set the record for the longest electric vehicle (EV) parade, and they were even verified by the Guinness Book of World Records.

The event was organized by Daniel Breton, President and CEO of Electric Mobility Canada.

A number of Tesla and other EV owners helped set a new Guinness World Record for the world’s longest EV parade earlier this week, as held in Quebec, Canada according to participant, @Ian Pavelko.

WE DID IT!!!
733 vehicles, now officially the world’s largest EV parade ever certified by Guinness!!
Congratulations to the organizers and all participants!!!@aveqc @EMC_MEC @clubteslaquebec pic.twitter.com/AMeU3mY8pH

Tesla fans in particular have been known for rallying their vehicles together around the world, like earlier this year when a handful of Tesla owners drove to Gigafactory Berlin-Brandenburg to spell out Elon for Musk’s 50th birthday.

The company is also well-known for holding events that bring Tesla fans, owners and shareholders together at its factories around the world, most recently including Tesla’s County Fair event at Gigafactory Berlin-Brandenburg, as well as the company’s Tesla AI Day held earlier this year.

In the U.S., President Biden signed an executive order earlier this year to electrify 50 percent of all new cars by 2030, a move expected to help push the public towards mainstream adoption of EVs.