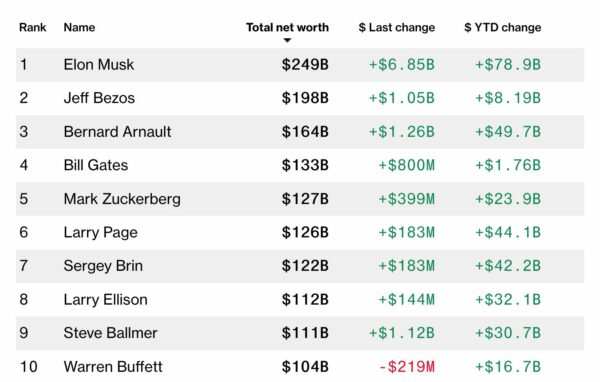 In January, Tesla and SpaceX Head Elon Musk became the richest person on Earth, and now he’s set to surpass another major milestone.

As of Friday, Musk is nearing $250 billion USD in total net worth, according to the Bloomberg Billionaire Index. The chart also shows that Musk has gained nearly $80 billion USD this year alone, most recently garnering another $6.85 billion USD.

Musk’s rocketing net worth is thanks to Tesla’s stock hitting new all-time highs today, after an impressive third quarter during the global semiconductor shortage.

Another notable top 10 richest is Warren Buffett, who backs Chinese automaker BYD, among a wide range of other companies.

Musk has also faced scrutiny around the world from several different sources, most recently undergoing an investigation from a U.S. agency over Tesla’s advanced driver assistance system (ADAS).

Earlier this week, Musk protested the prospective pick for a new National Highway Traffic Safety Administration (NHTSA) as having a history of bias against Tesla, amidst a probe from the agency into Tesla’s Autopilot and first-responder crashes – to which Tesla must respond by today.

Take a look at all of the new Tesla Superchargers that went live across the globe this past week, courtesy of data from Supercharge.info and the TMC Forums: Date Opened Location Number of Stalls Power Rating Official Listing September 26, 2022 2 Rua do Miradoiro, Vigo, Pontevedra, Spain 12 250 kW Tesla September 26, 2022 Strevelinsvej 13, […]
Nehal Malik
4 hours ago

As China celebrates its legal holiday of National Day this week, Tesla’s Gigafactory Shanghai will stay open with some added benefits for employees who work for the holiday. Tesla’s Giga Shanghai is remaining operational during China’s National Day holiday running from October 1 to 7, as reported by a source familiar with the matter reporting […]
Peter McGuthrie
12 hours ago

Tesla is looking to expand Gigafactory Nevada after years of announcing plans to do so, according to sources familiar with the matter reporting to electrek. Past statements by Tesla held that the Giga Nevada location would be able to produce around 105 GWh of battery cells per year and 150 GWh of battery packs per […]
Peter McGuthrie
13 hours ago