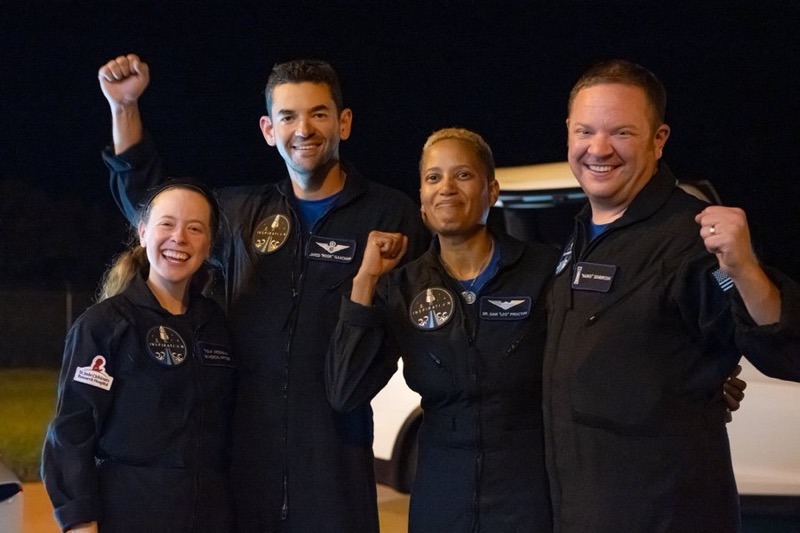 After SpaceX’s Dragon capsule safely splashed down tonight in the Atlantic Ocean, after orbiting Earth for three days with its first-ever all-civilian crew, the Inspiration4 mission has reached yet another milestone.

The goal of the Inspiration4 mission to space was to help raise $200 million for St. Jude Children’s Research Hospital.

“Treatments invented at St. Jude helped push the overall childhood cancer survival rate from 20 percent to more than 80 percent in the United States,” says the Inspiration4 fundraising page. The goal is to use funds to help kids with cancer in developing countries as well.

Billionaire philanthropist and Mission Commander Jared Isaacman from the Inspiration4 mission, set things off by donating $100 million prior to the launch to space. The goal was to raise $100 million more through publicity from the mission to orbiting Earth for the first time with an all-civilian crew.

To date, Inspiration4 donations are at $60.1 million as of writing. But tonight, SpaceX CEO Elon Musk said “count me in for $50 [million]”, taking the total to over $210 million.

Thank you, @rookisaacman, @inspiration4x, @elonmusk, @SpaceX for thinking beyond our planet and making things better for all of us here now and in the future.

At just $160 million raised prior to Musk’s $50 million, that amount, according to St. Jude, could provide over 2 million days of meals for St. Jude families, as just one way of how funds can help children and their loved ones.