A major part of any Tesla driving experience is the ability to access the internet for navigation, music and more, though Tesla recently reduced the trial phase of its Premium-tier connectivity level for customers.

Tesla has reduced the trial phase of Premium network connectivity for all of its Model 3 and Y owners to just 30 days, starting on Friday, according to @TeslaOwnersEUR.

The change means all versions of Model 3 and Model Y now only have a 30-day free trial, which was the default for Standard Range Plus Model 3, instead of one year for other configurations.

While Tesla offers two tiers of connectivity, Standard or Premium, those purchased prior to July 2018 are entitled to Premium connectivity for life, while those paying a subscription for the service will have to pay $10 USD per month.

Sadly #Tesla reduces trial phase of premium connectivity for all Model 3 and Y to 30 days, starting with new orders from today. https://t.co/dhoGZj4mqX

You can see the changes from Tesla’s website on Premium Connectivity below for Model 3 and Model Y, applicable to the United States and Canada as well: 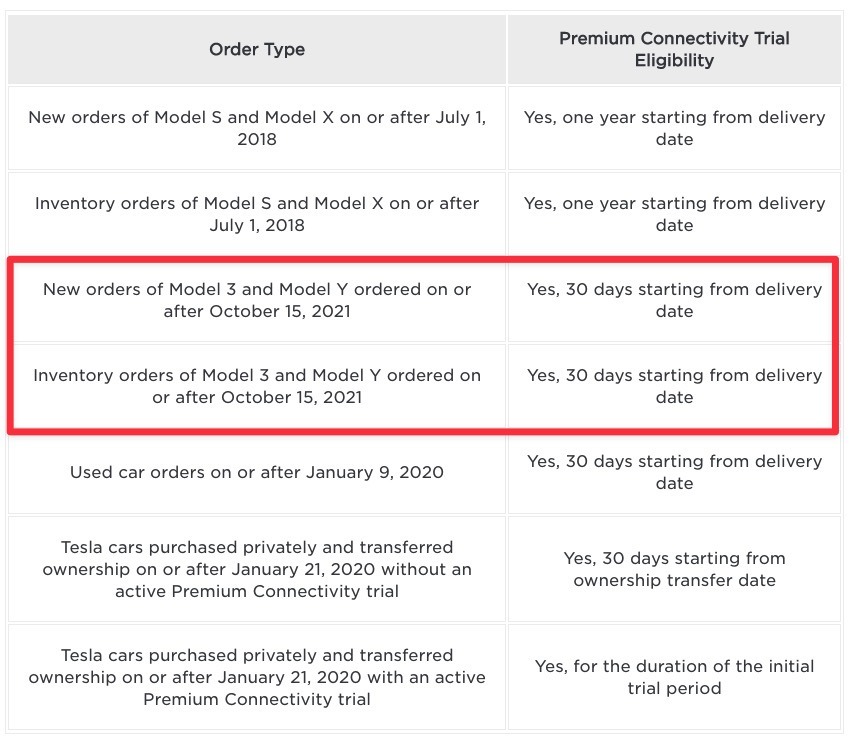 Previously, purchases of a Long Range Model Y saw a one-year free trial of Premium Connectivity, for example. But now that is down to just 30 days. It also means Tesla will be seeing more services revenue as users will likely subscribe to Premium Connectivity to access features over cellular.

The news comes just a month after the Tesla Model Y became available in Europe, as exported from the company’s Shanghai Gigafactory.

Tesla is also nearly done with the construction of its first European Gigafactory, located in Grünheide, Germany, which is set to gain final approval this year and begin delivering German-made vehicles to customers throughout Europe by the end of the year.

Other recent changes on Tesla’s website in the past 24 hours, include removing prices and specs from the Cybertruck page, plus increasing the price of Model 3 in Canada by $2,000 CAD.