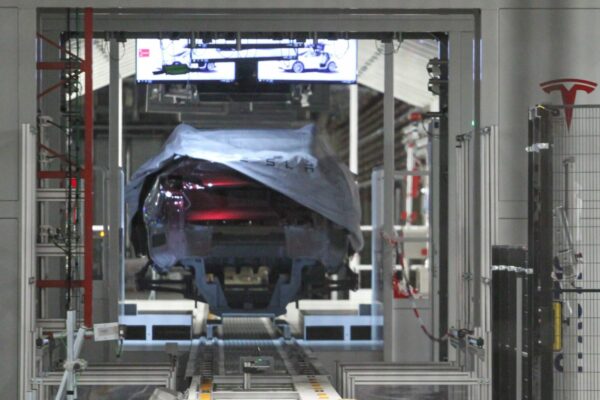 Tesla CEO Elon Musk confirmed a special crimson-colored Tesla would come from Gigafactory Berlin-Brandenburg, and since the event, one publication has shared our best look yet at the new color.

T&E Magazine shared a glimpse of Tesla’s crimson red Model Y unit on Tuesday, as witnessed at the company’s Gigafactory Berlin-Brandenburg County Fair event over the weekend (via @Tesla_Adri). The partially-covered Model Y was an Easter Egg of sorts, as it was somewhat visible in the company’s paint shop during the event.

In case you missed it. Tesla "hid" a crimson red model y in the paint shop of giga berlin – brandenburg during the county fair. Nice little easter egg.

In the Tesla Berlin Gigafactory tour below by HyperChange, at the 17:35 mark, you can see where Tesla left the crimson red Model Y partially uncovered for people to see:

Tesla’s Gigafactory Berlin-Brandenburg County Fair took place on Saturday, holding 9,000 guests inside the new facility, complete with a walkthrough tour and the chance to sit inside a Model Y.

Another visitor to the event pointed out how the Tesla Model Y’s seats mount directly onto the 4680 battery pack, as discussed at the event with many of the company’s engineers, who were able to confirm the detail.

Tesla also shared a new render of its Gigafactory Berlin-Brandenburg on its website this week, with the site expected to receive final approval very soon. The factory is also reportedly ready to begin producing vehicles as soon as later this month, with European deliveries expected to begin by the end of this year.

The U.S. Securities and Exchange Commission (SEC) has launched a probe into Elon Musk for his role in directing the branding around Tesla’s self-driving car ambitions — reports Bloomberg. According to the publication, the efforts are part of the regulator’s ongoing investigation into Tesla’s claims surrounding its Autopilot and Full Self-Driving (FSD) features. SEC officials […]
Nehal Malik
9 hours ago