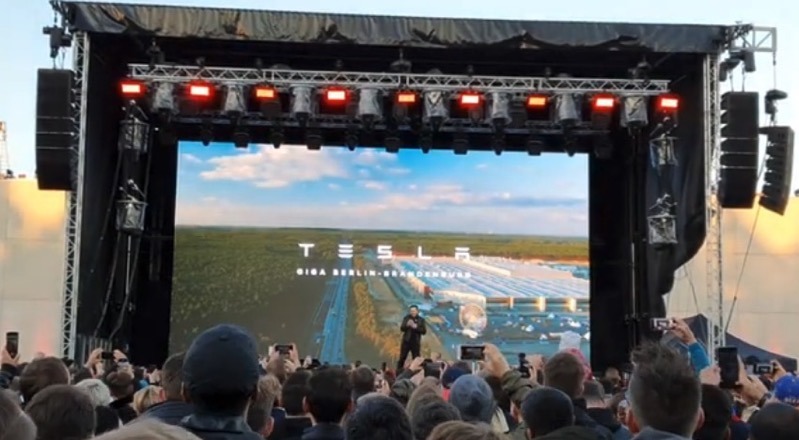 Despite some technical difficulties starting off his time on stage, Musk tried to calm the crowd by reading German from his slide deck, and eventually started speaking German on his own, impressing attendees.

A video of Musk speaking was recorded by Tobias Lindh, who you may recall has been documenting construction of the site by drone over the past year.

The Tesla CEO reiterated his boilerplate statements of noting the factory will help the world “transition to a sustainable energy future—which we all want.”

When asked about Cybertruck, Musk said they’d try to bring it across to Germany, or make a smaller one if that was possible. “You can petition the regulators to allow it,” said Musk. “There will be other interesting things and vehicles from Tesla that I believe will be really exciting,” added the Tesla CEO.

“There’s going to be a special crimson. The way you do the colours is important. You need to have a multi-layer paint system that’s gotta be designed into the paint. It’s more than just a color…you want dimensionality to the paint, which is only possible if you have multiple layers,” said Musk, again hyping up the Giga Berlin paint shop.

Giga Berlin will have world’s most advanced paint shop, with more layers of stunning colors that subtly change with curvature

@elonmusk did I spot crimson red? at #gigaberlin #tesla pic.twitter.com/nRSVSLdU6G

Musk explained to the audience Giga Berlin needs 12,000 jobs or more, as Tesla needs “great talent to come here from all around Europe, to help us create the new future.”

The Tesla CEO said the company will “replant many more trees than removed” and use a minimum amount of water. The goal is to have 100% renewable energy as the source for the factory, later said Musk.

Musk said Tesla plans to build a new larger train station on site, to allow for transport to Berlin in 30 minutes.

Giga Berlin will have graffiti murals all throughout the factory, while when asked about Full Self-Driving, Musk said he hopes the system beyond beta will hit Europe by next year.

Tesla hopes to produce 5,000 cars per week at Giga Berlin, with Musk adding he would be hoping to reach 10,000 per week. Tesla wants to replace 1% of cars per year with its cars and eventually reach 20 million cars produced per year.

Oh, Tesla also announced it was making a beer in Germany, and it’s unclear when it will become available. 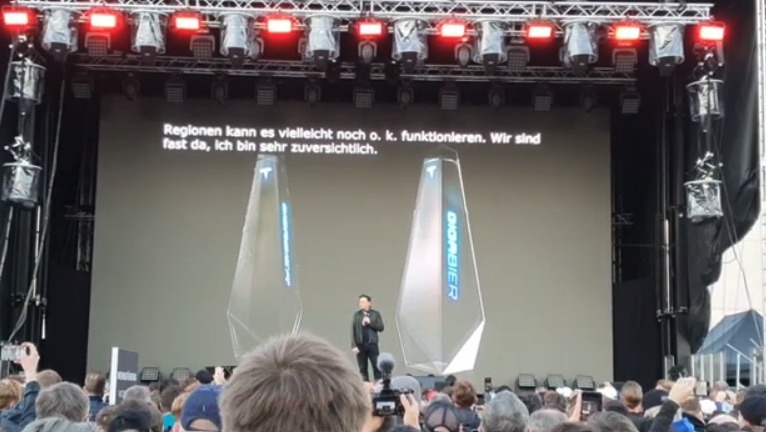 Here’s another similar video of Musk speaking at Giga Berlin, with a closer view and louder audio:

Tesla CEO Elon Musk recently met with French President Emmanuel Macron to discuss the “manufacturing of electric vehicles and batteries,” among other things. “In line with our ambition for decarbonizing and reindustrializing France and Europe, with @elonmusk we exchanged on future green industrial projects, such as manufacturing of electric vehicles and batteries,” President Macron said […]
Nehal Malik
5 hours ago