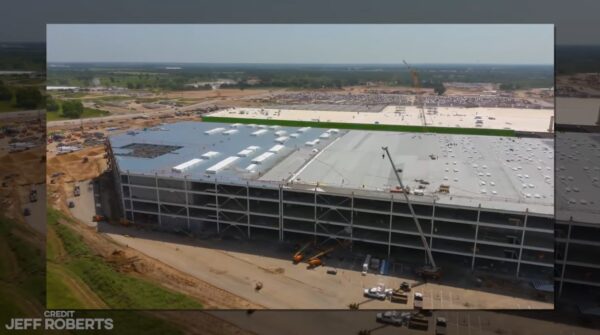 Tesla’s Gigafactory Texas is set to begin trial production of the Model Y as soon as next week, and with production models expected to begin just a couple of months after that, the production facility is already nearing completion.

A new video shared by My Tesla Weekend on Wednesday shows that Gigafactory Texas is about 72 percent done, along with sharing news that the facility has broken 8 million square feet in size, according to the channel.

Along with the sheer size of the Gigafactory, the video breaks down a number of new developments at the construction site.

The video host points out that the site’s construction has remained steady, despite some rainy weather as of late. Among nearly completed pieces of the facility are the building’s roof, as well as the interior area which is being prepared for factory use.

In June, the Austin, Texas site was also awarded Manufacturing Project of the Year.

As Gigafactory Texas prepares for completion by the end of this year, the construction site is certainly coming together, and is even expected to beat out Gigafactory Berlin, due to delays with the German approval process.