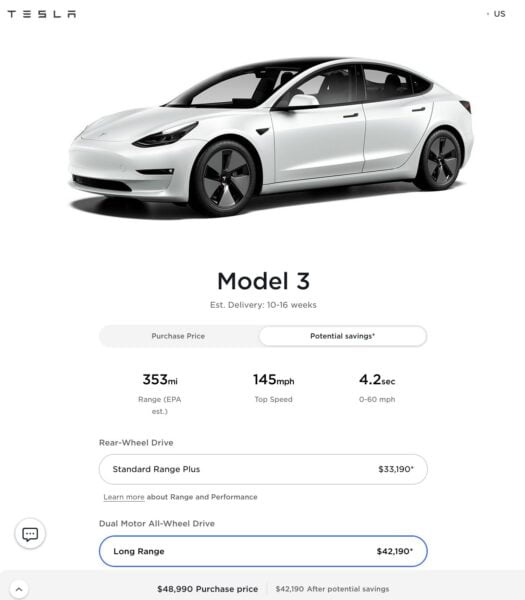 After recent Tesla Model Y production delays, it appears that those hoping to order certain variants of the Tesla Model 3 may be hard-pressed to receive deliveries before November, according to updates shown on Tesla’s website.

Tesla Model 3 Long Range deliveries have been delayed in the U.S. due to high demand, as orders of the model are now appearing on the company’s order configurator with delivery estimates of 10 to 16 weeks (via Teslarati).

At the earliest, customers who order Tesla Model 3 LR units now can expect to see their vehicles in September.

The update comes as demand for the vehicle, and electric vehicles (EVs) in general, continues to surge in the U.S. ahead of the company’s completion of Gigafactory Texas. While the company currently manufactures its vehicles at its Fremont, California factory, the company will soon also produce the models at the upcoming site in Austin, Texas, which is expected to be completed later this year.

This morning, @TroyTeslike claimed he heard Tesla will start production at Giga Texas with Cybertruck, instead of Model Y.

I have heard that Tesla is planning to start production at Giga Texas with Cybertruck, not the Model Y.

In addition to surging Model 3 demand, and despite increases in new Model Y pricing, Tesla’s Model Y drove Q2 registrations up 85 percent in California, the initial production headquarters of the U.S. EV company.

The news also comes ahead of Tesla’s Model Y and Model S Plaid release in Europe, expected to take place during this year’s Q3.