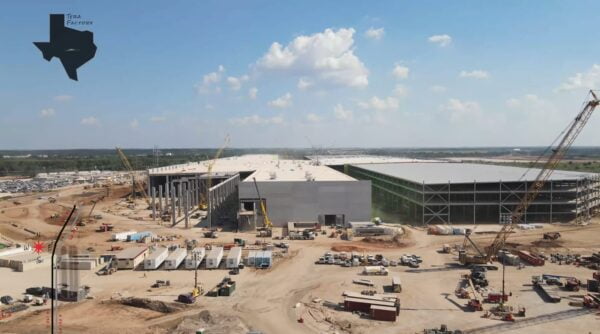 Tesla’s Gigafactory Texas is starting to develop an interior, as shown in recent videos depicting the construction site’s roof additions, among other updates bringing the factory closer to fruition.

We can see one of the Gigafactory’s biggest updates in the site’s Gigapress area, where the roof installation is coming together with the addition of more double-row roof tiles. According to the video’s host, Randy, this section of roofing could be completed as soon as Sunday or Monday at the current rate.

In addition, the footage shows a number of conduit trenches that have been dug for added power to the production facility’s main building, as well as updates to the site’s Bobcat Project area and the road connecting either side of the site.

According to Tesla CEO Elon Musk, Gigafactory Texas will need to hire 10,000 employees through 2022, with plans to produce and release the company’s highly-anticipated Cybertruck – a fully electric, stainless steel pickup truck.

Last month, Tesla Gigafactory Texas also produced its first diecast Model Y body, another indicator of how close the factory is getting to production, which is set to begin as soon as this summer.