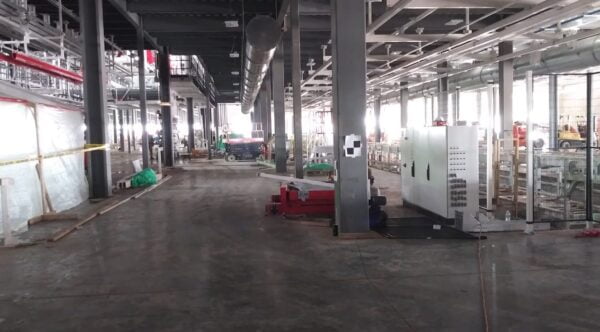 Last year, Tesla planned substantial completion of its Gigafactory Texas by May 2021. While the company hasn’t quite reached that goal, they’re much closer to being on target in Texas than they are with Gigafactory Berlin, due to a number of delays.

A new video from Jeff Roberts shows a number of photos from inside Tesla’s Gigafactory Texas, as it nears relative completion. While there are still a number of construction supplies laid out and around the floor, as well as construction workers still working, this is the most put-together we’ve seen the factory yet.

Despite still being constructed on the interior, the facility now resembles an enclosed building, and we know from the factory itself that a crew already produced a diecast Model Y body in recent weeks – meaning that the factory’s assembly department is just about ready to begin production.

With Tesla’s highly-anticipated Cybertruck expected to begin production this summer, this could have major implications for preorder customers of the stainless steel electric truck.

We can also compare the inside shots of Gigafactory Texas with this progress video from just a few weeks ago, in which we can see more of the exterior work on the construction site, with a few glimpses inside.

You can see Jeff’s full inside look at the Gigafactory Texas below, complete with a slideshow of photos from the factory’s interior.

After a Delaware judge set Tesla CEO Elon Musk’s deposition for this week, the opportunity for the billionaire to answer questions under oath has been pushed back to next week. Musk’s deposition for an upcoming trial with Twitter has been rescheduled to October 6 and 7, according to a filing with the court on Tuesday […]
Peter McGuthrie
2 hours ago

Although Tesla CEO Elon Musk has previously said he hopes to shift away from end-of-quarter sales pushes, the automaker is expected to have another huge batch of deliveries heading to customers to end the third quarter. Musk apparently sent an email to employees requesting help for a “very high volume” of third-quarter deliveries, and analysts […]
Peter McGuthrie
3 hours ago