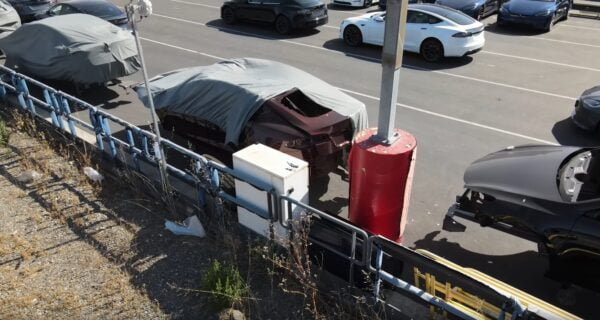 After Elon Musk‘s remarks last year that deep crimson from the upcoming Gigafactory Berlin was his favorite car color, a Model S has been spotted at Tesla’s Fremont Factory sporting the very same deep crimson shade in a drone flyover video taken Saturday (via Teslarati).

A Model S featuring the same crimson shade was also spotted being driven around a SpaceX facility last year, though none have yet been spotted at the company’s under-construction Berlin Gigafactory.

While the color isn’t currently available to consumers, the sighting hints that Tesla could be looking to produce the shade of car at a wider scale than previously known, since Musk originally referred to it as being “from Giga Berlin.”

New deep crimson from Giga Berlin is my favorite

Musk has already said that Gigafactory Berlin will have “the world’s most advanced paint shop,” though the production facility is still incomplete. In addition to the Berlin factory, however, Musk followed up saying that Gigafactory Shanghai and the Fremont Factory paint shops would also be upgraded, though he also said that some of the changes could take time.

But now, with Gigafactory Berlin’s completion pushed back to the end of 2021, the company could elect to produce the crimson color at its Fremont facility or Texas Gigafactory – especially if plans were already arranged to upgrade each facility’s paint shop at some point in the future.

Tesla is set to hold its Model S Plaid delivery event this week on June 10. The company has cancelled its Plaid+ version, with Elon Musk saying the version was not needed due to the insane acceleration of the Plaid Model S.

More electric vehicles (EVs) are set to be sold in China this year than throughout the rest of the world combined, according to an exposé from The New York Times on Monday. As many countries struggle to incentivize EV sales using tax credits and subsidies, China’s customer base has already begun to pivot toward the […]
Peter McGuthrie
14 hours ago

A coming software update has added a useful pop-up feature for Tesla’s Superchargers, showing new details that weren’t previously included. Tesla software update 2022.36 includes a newly designed pop-up map feature for Supercharger locations, as detailed by Not a Tesla App on Monday. The pop-up map includes information such as the number of available charging […]
Peter McGuthrie
15 hours ago

Tesla’s official CCS Combo 1 adapters have begun delivering to customers, as noted on Monday by a Model 3 owner (via Reddit). The CCS adapter costs $250 in the U.S. and $325 in Canada, offering up to 250 kW at third-party charging stations where Tesla’s proprietary Supercharger connections aren’t available. Tesla launched official sales of […]
Peter McGuthrie
15 hours ago