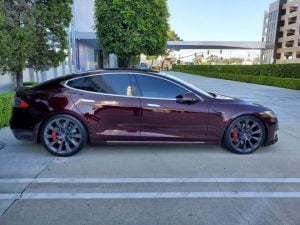 A few days ago, Musk had teased that a new ‘deep crimson’ color was being developed in Giga Berlin. Twitter user Ryan McCaffrey posted a photo of a Tesla Model S on Twitter parked at the SpaceX Headquarters. The vehicle body was painted in a mysterious color:

As reported by Teslarati, this Tesla Model S was parked in a reserved spot and had been “painted and not just wrapped”. Some people even think that this car belongs to Elon Musk himself. However, someone else pointed out that this could be another color entirely, suggesting that this color was more similar to “eggplant purple”.

That looks eggplant purple (so lots of blue mixed with the red). Crimson is color code #a2231d
So deep crimson should be a darker version of that. pic.twitter.com/NWZD0HwNCI

According to Tesla owner @TesLatino, he says the colour looks like the wrap on his Model S, to which Elon Musk had previously replied, “nice color”, which could suggest the CEO did favour this hue.

They sure look similar. No wonder @elonmusk said “Nice color”, when I posted mine. Now it makes sense. He really like the hue. pic.twitter.com/w9Ilx7sC0I

We already know that Giga Berlin will have a next-generation paint shop. Musk wants customers to be able to personally design their Tesla cars, by offering unique and new shades of colors.

Tesla still hasn’t responded to this new discovery, so all we can do is speculate right now. Even if this new color shade isn’t the ‘deep crimson’ Musk was referring to, it is great to see that Tesla is experimenting with new customization options.

Update July 28, 2020: Elon Musk has just responded to say this Model S “is a prototype of the colour”.

It’s a prototype of the color