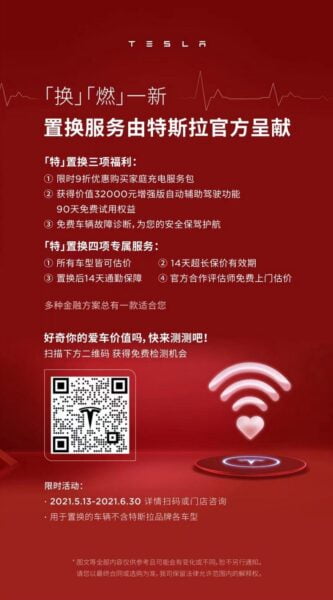 In a new announcement on Monday, Tesla has announced plans to revamp its vehicle trade-in appraisal service in China, as shared by @Ray4Tesla.

The new system applies to all different makes and models and offers a 14-day guaranteed appraised value with the addition of a 14-day commute use of the trade-in vehicle before new deliveries arise.

The new system also has a contracted appraiser go to the home of the Tesla owner, rather than requiring the owner to visit a service center. Other perks of the updated system include a 10% discount for all home-charging packages, free Enhanced Autopilot for 90 days, and a free vehicle inspection.

Tesla in China is well-known for offering extra perks and incentives, with the company last month offering free Enhanced Autopilot and Supercharging for all vehicles delivered by June.

In April, Tesla sold 25,845 vehicles in the Chinese market, down 27% from the company’s March sales numbers. In spite of this, Tesla also commonly delivers the vast majority of its vehicles nearing the end of each quarter, not the beginning.

Tesla also faces increasing competition in China, where local companies like NIO, Xpeng Motors, and Li Auto saw major growth despite the ongoing chip shortage, and tech companies like Baidu and Huawei are pouring as much as $19 billion into electric vehicle (EV) production.