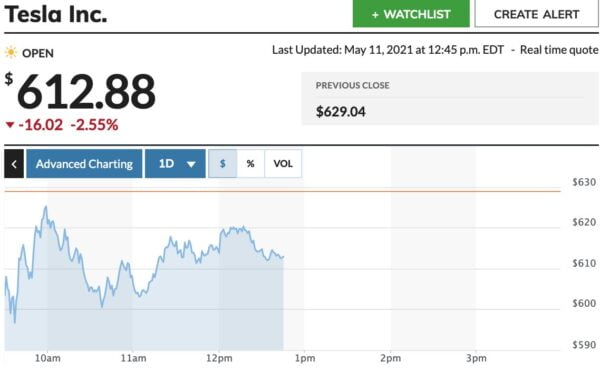 After a whirlwind series of public criticisms in China, alongside reports that it was bolstering relations with Chinese regulators, Tesla now faces falling sales in comparison with rivals, and, subsequently, falling shares.

Tesla’s (TSLA) shares fell on Tuesday, following a decline in the company’s April sales in the Chinese market from March, according to Marketwatch.

In April, Tesla sold 25,845 vehicles that were made in China, which was down 27 percent from March. While overall EV sales in March fell across the Chinese market, falling a whopping 12 percent, shares of NIO actually made gains of 1 percent, undoing earlier drops of 6.2 percent, while Xpeng Motors and Li Auto saw smaller drops than Tesla.

Tesla’s shares declined as much as 5.3 percent on Tuesday, falling to a price of $612.88 at the time of writing. The news also comes on the heels of a 6.4 percent drop on Monday, which also followed a three-week downturn for the U.S. electric vehicle (EV) maker.

In a note to clients, Wedbush’s Dan Ives wrote, “Tesla’s share gains stagnated vs. domestic players Nio, Xpeng and Li Auto during the month as the company faced a handful of negative PR issues in China stemming from well-discussed safety issues, military spy noise and the protest at the Shanghai Auto Expo.”

Earlier today, a Reuters report claimed Tesla had paused its land buy to expand its Giga Shanghai factory, but the electric automaker replied to say the site was “developing as planned.”

Tesla’s Gigafactory Texas is reportedly aiming for 75,000 units of the Model Y in the first quarter of 2023, according to an unnamed source who shared the information with electrek. The figure equates to more than 5,000 units per week at the site for the entire quarter, marking a significant production increase from the 1,000 […]
Peter McGuthrie
14 hours ago

Although Tesla currently remains the top electric vehicle (EV) manufacturer in the U.S., a new study shows that increasing competition is slowly chipping away at the company’s market share. Tesla has a 65 percent EV market share in the U.S. in the first nine months of 2022, which is down from 79 percent in 2020, […]
Peter McGuthrie
16 hours ago