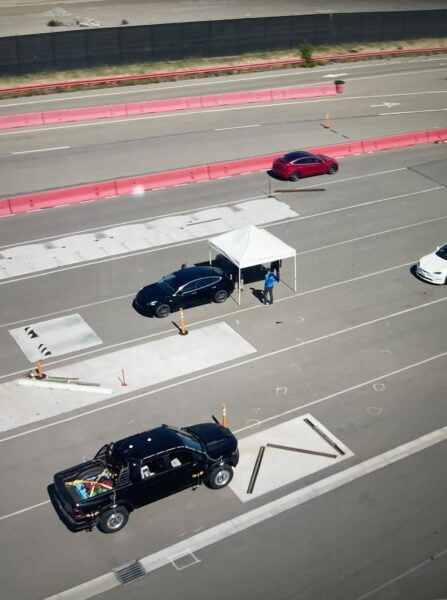 Tesla might be benchmarking against the RAM TRX truck in its Cybertruck development, according to a video from Gabeincal, points out Pascal Guertin, who notes the Dodge is the “best truck offered by a OEM” – signaling good things for the future of the Cybertruck.

Starting at about 1:30 in the drone flyover video, we can see overhead footage of Tesla’s Fremont factory track near a Model 3, Model Y, and Model S, and the Dodge Ram TRX. While the Cybertruck itself is not seen in the video, Cybertruck production is allegedly right around the corner, making this likely to be benchmark testing for the highly-anticipated electric truck.

$TSLA benchmarking the RAM TRX in Cybertruck development. This is smart as the TRX is as of now the best truck offered by a OEM. @elonmusk might be a few months late with Cybertruck but it wont be short. @RamTrucks pic.twitter.com/4qjAzteiik

With Tesla’s Cybertruck rumored to begin production in June at Gigafactory Texas, it shouldn’t come as too much of a surprise to see the company comparing builds with a standard non-electric pickup truck. Prior to the rumor, CEO Elon Musk stated that a Cybertruck update would “probably” be coming in Q2.

Earlier this month, Musk was also seen driving around Gigafactory Texas in a Cybertruck, with Musk previously saying that the truck doesn’t need a garage, won’t have door handles, and floats if stuck in water.

In any case, you can watch Gabeincal’s full drone flyover video of Tesla allegedly benchmarking of the Dodge RAM TRX below:

Tesla CEO Elon Musk said on Saturday that the company has successfully completed its first 500-mile test drive of a Semi truck with a full load. With its haul, Musk noted that the vehicle weighed in at a whopping 81,000 lbs (or 40.5 tons). Tesla team just completed a 500 mile drive with a Tesla […]
Nehal Malik
3 hours ago

In a recently published YouTube video, Brad Sloan gives us a high-fidelity aerial tour of Tesla’s Gigafactory in Austin, Texas, on the morning of Friday, November 25. While most of the workers had the day off for Thanksgiving, some contractors can still be spotted on the site. A fair amount of ready-to-deliver Model Y units […]
Nehal Malik
21 hours ago