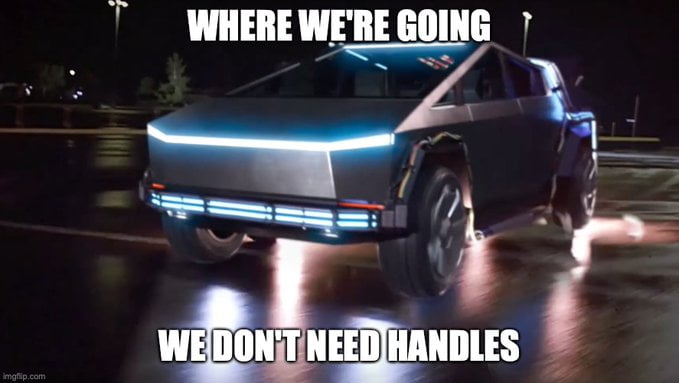 When asked if the Tesla leader could share a Cybertruck update, Musk casually replied, “there will be no handles”.

There will be no handles

Removing door handles would increase aerodynamics and lower the truck’s drag coefficiency, an important factor when it comes to electric vehicles for increasing range.

How do you open doors without handles? It would probably be similar to how the new Roadster doors open, as seen in the video below:

Tesla still has yet to fully reveal the final design characteristics of the Cybertruck, which is expected to start production later this year. We do know the Cybertruck will be bulletproof to protect you from the haters.

Earlier this week, Tesla announced it would now accept payment for cars with Bitcoin.

Tesla has modified its website design to introduce rectangular buttons, eliminating the pill-shaped designs from before. The electric automaker’s main site now shows “custom order” and “existing inventory” buttons as rectangles, while on configuration pages, rounded corners are a thing of the past, as sharp rectangular buttons are now commonplace, seemingly leading us towards the […]
Sarah Lee-Jones
3 weeks ago