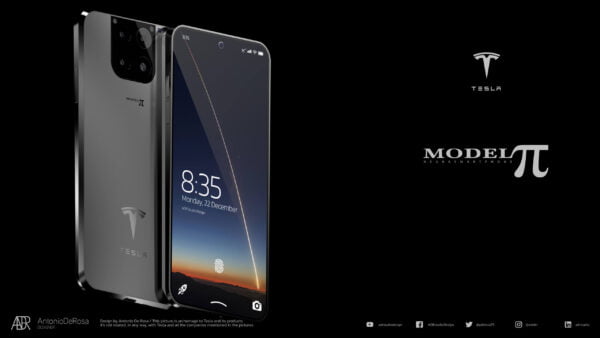 Tesla’s fans have created some wacky fake products in the past, like this paper mache Supercharger. But a new product has surfaced in homage to Tesla and SpaceX, and wacky has nothing to do with it.

Designer Antonio De Rosa, known for his Apple product concepts, has designed a slick Tesla concept phone, dubbed the Model Pi or the Model P, created in honor of Tesla and SpaceX’s Starlink. The promo can be found on De Rosa’s website, along with a number of features he imagines such a phone would offer.

These concept features include the ability to sync information across Tesla devices, an on-board, native Starlink connection, capacities to work with Neuralink, mining for the first Mars-based cryptocurrency, Marscoin, and four different camera lenses to capture all the pictures you might need.

While it (unfortunately) isn’t as real as this Musk Be on Mars iPhone 12, the Tesla Model Pi concept phone has a lot going for it, boasting a sleek design and a number of good ideas for featured software capabilities.

As we accelerate into a future of space travel, zero-emissions vehicles, and, hopefully soon, an Apple Car, this concept phone begs one important question: Will Tesla someday consider entering the smartphone market?

Only time will tell, but for now, Antonio De Rosa’s Tesla Model Pi beautiful concept phone design will just have to hold us over. Check out the video below as well: