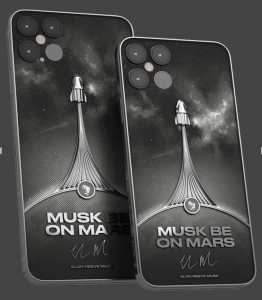 There’s no denying that Elon Musk is on top of the world, but some crazed fans and companies are taking his reputation to a whole new level using designer products.

Now, a Russian luxury technology company, called Caviar, is accepting preorders for a special edition smartphone depicting the SpaceX Dragon as it lifts off, as well as the words “Musk Be On Mars,” as reported by Space Explored. The custom iPhone 12 is ranging between $4,990 USD and $6,150 USD, and Caviar will only make 19 of them total.

The decorative backplate will be constructed completely out of Titanium, with the exception of a miniature piece of material embedded from a SpaceX mission, according to the company.

In the past, Caviar also released an iPhone 11 which looked like a cybertruck, entitled “Cyberphone.” They also have the iPhone X Tesla, which is a Tesla-themed phone with fully-functioning solar panels on the backplate. Though it might feel like it defeats the purpose for many of us who keep our phones in our pockets, anyone who pays $5,000 USD should probably be willing to take their phone out more often than others.

While it’s no DIY paper mache supercharger, the new “Musk Be On Mars” iPhone is certainly something of a spectacle.

SpaceX has launched Starshield, a new, secured satellite service geared toward government entities and national security applications. It sounds kind of like Starlink, but for the government instead of regular consumers and capable of more than just providing an internet connection. “Starshield leverages SpaceX’s Starlink technology and launch capability to support national security efforts. While Starlink […]
Nehal Malik
17 hours ago