The latest in internet DIY (or perhaps DIWHY?) Tesla news comes to us from Sacramento, California, where a Tesla owner and fan made a full-size Supercharger out of paper mache.

The most amazing part is perhaps the fact that it is fully-functional and can charge your Tesla’s battery to the fullest.

Reddit user u/flyfishnorth shared this beautiful beast with the internet world on Monday, and Redditors all over are flocking to the post to both admire and question the creation, though it’s clearly a unique feat that deserves some recognition. The post set the subreddit r/teslamotors up to be taken by storm in a wave of lighthearted, funny, and even politely criticizing comments. 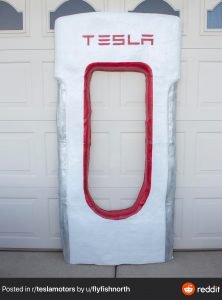 In a response to a commentor, u/flyfishnorth said, “This is a quarantine project that I have been working on for a few months. It weighs about 7.5 pounds or 3.4kg. Height is 74.75″ or 1.89 meters. Lettering was done with a 3d printed stencil.” As far as the reason he’s getting rid of this wonderful creation, the reddit user added, “It’s too big for my garage right now, so if you’re in Sacramento, CA and you’re interested, DM me and we could work out a price.”

While it may not have a battery capacity of its own, it works with an 11.5kW Tesla Wall Connector. What this practical arts and crafts project lacks in charging capacity, it basically makes up for in its lightweight design – weighing in at just 7.5 lbs (3.4kg), the original poster is currently trying to clear out some extra garage space.

Although Tesla Supercharger usage is now at a pre-COVID-19 high, this clever internet user and paper mache enthusiast seems to be doing both quarantine and Tesla fandom the right way.

Update August 4: The owner of the paper mache Supercharger, Chet M., reached out to Tesla North to note the shell of the charger has no batteries or electrical components; the charger itself houses a Tesla Wall Connector. This article has been updated accordingly.

The EV Bubble is Bursting Except For Tesla, Says Jim Cramer