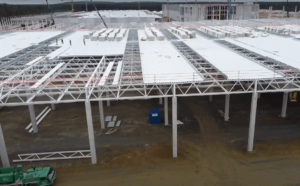 In a recently published YouTube video, @Gf4Tesla gives us another aerial view of the construction progress on Tesla’s Berlin Gigafactory as of October 16.

First of all, let’s talk about the elephant in the room — it would appear that news reports of construction at the site being stopped were absolutely false, as we can see from the video that work on the site is very much underway.

The video, shot via drone in 4K, showcases just how far along the Giga Berlin project really is at this point. We can see new columns erected in the casting area, roofing work being done at a pretty fast pace, significant progress on the paint shop, and insulating wall linings being installed on the southern side of the Drive Unit building (which we’ve also gotten a glimpse inside of).

Those closely following the progress of Giga Berlin were concerned about local criticism of the facility’s water usage and noise pollution ahead of a public hearing, along with reports of Tesla not paying the water bill for the site.

However, it seems like Tesla has promptly taken care of those obstructions, and that Giga Berlin’s construction is right on schedule for completion in summer 2021.

Take a look at all of the new Tesla Superchargers that went live across the globe this past week, courtesy of data from Supercharge.info and the TMC Forums: Date Opened Location Number of Stalls Power Rating Official Listing September 26, 2022 2 Rua do Miradoiro, Vigo, Pontevedra, Spain 12 250 kW Tesla September 26, 2022 Strevelinsvej 13, […]
Nehal Malik
2 hours ago