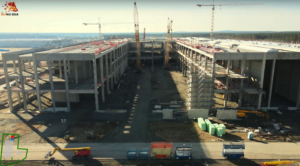 Tesla is currently building new factories in Austin, Texas and Berlin, Germany, and both are set to be done by mid-2021.

In a new video, YouTube channel the_wolfpack_berlin shows a 4K drone footage of Tesla’s Giga Berlin factory, and its progress is coming along quite nicely.

The video depicts many of the same new walls and lightning conductors we saw in the last progress update, but this iteration includes in-progress roofs on just about every building.

The faster Tesla can finish its Giga Berlin factory, the sooner European customers can see the electric vehicle (EV) brand’s European-built cars delivered. Until then, the company will export cars to Europe from its Shanghai factory.

Ultimately, the completion of Giga Berlin will speed up production at both factories, and it’s also expected to bring the cost of cars down significantly. Another factor set to increase production speed and cost is the new 4860 battery cell, announced at this year’s Battery Day.

Recent reports also revealed that Tesla does plan to design original cars out of its Berlin and Shanghai factories.

While Tesla gears up for the launch of its US-made Cybertruck, consumers around the world eagerly await their chance to drive an EV made by Tesla, and for those who don’t already have it, it won’t be long.