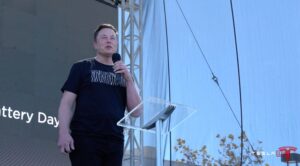 On Battery Day, Tesla unveiled its new 4680 cell battery, which is set to cut costs significantly for the electric vehicle (EV) company. The day also included the announcement of a $25,000 vehicle to be announced in the next few years, as a result of the new cell technology.

Now, in a Twitter response Monday, Tesla CEO Elon Musk confirmed that both Giga Shanghai and Giga Berlin will each do their own original car designs.

The tweet was in response to another user asking specifically if the Shanghai and Berlin design centers would design original cars, or if the two would be the same, smaller car. Musk, known for his short, noteworthy tweets, responded simply, saying that “both will do original cars.”

Both will do original cars

The news is surprising, to say the least, especially given Tesla’s highly-anticipated Cybertruck, which is set to be delivered in the US by May 2021.

Many have speculated about smaller Tesla models for the European and Asian markets, and it seems likely that these upcoming models will fill those roles. Still, there is no official announcement, and likely won’t be for at least a little while.

Tesla is planning to add a new showroom and service center in Northern Netanya, Israel, according to a property lease signed by the automaker, reports Globes. The site is located at 39-41 Hakadar Street in Netanya, complete with a nearby store from Chinese automaker Geely Geometry. The property includes about 3,300 square meters (10,826.77 square […]
Peter McGuthrie
21 hours ago

Thailand has been one significant expansion project from Tesla in recent months, and now the automaker is launching some of its first fast-charging stations and a new retail store in the country. Tesla is preparing to launch the first V3 Supercharger station in Thailand, located on the B1 floor of the CentralWorld shopping complex in […]
Peter McGuthrie
22 hours ago

The Motortrend crew recently visited Frito-Lay’s upgraded, zero-emission distribution center in Modesto, California to talk with Tesla Semi drivers and see the truck in person. The publication was able to gather a few extra specs on the Tesla Semi, noting that the huge vehicle sported a Model S Plaid tri-motor powertrain but turned around the […]
Peter McGuthrie
22 hours ago