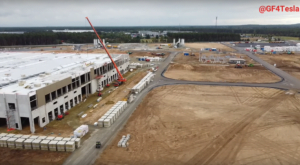 Tesla is speeding through the construction of its Giga Berlin and Texas factories, and both are already planning on delivering vehicles in the summer of 2021.

In a new video released by Tesla-news YouTube channel GF4Tesla, the host shares drone flyover footage of the in-progress Giga Berlin. The footage was shot on Friday, and includes a handful of new features, not yet included in prior updates.

Among the new features, Tesla Berlin construction site now depicts the first of many walls on the body-in-white factory building. Additionally, the general assembly and seats production areas also received its first few walls leading up to the weekend.

In addition to the new walls added on the body-in-white, general assembly, and seat production areas, the drive unit area includes brand new facade elements to the west.

Giga Berlin is certainly sprouting up – especially given its impressive progress since our other most recent update – and it’s expected to be fully complete and delivering vehicles throughout Europe by July 2021.

While the progress is exciting, Tesla still has a long way to go before it can deliver vehicles directly to the European market. For now, its Shanghai Gigafactory will have to pick up the extra slack in exporting its vehicles to Europe.