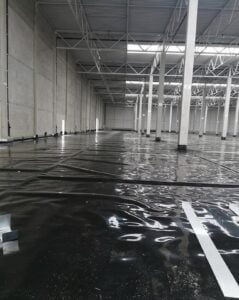 Images shared by Twitter user @Gf4Tesla in a recent tweet seem to showcase the progress being made on Giga Berlin’s construction. However, this is more than your typical construction update, as images shared in a follow-up tweet give us our first look from inside a building on the premises.

#GigaBerlin
Photos leaked from inside the ' Drive Unit ' ( DU )
You can probably see the " cleanliness cover " before the final concrete floor is applied.

The images are from inside the Drive Unit (DU) building, which has already had walls and a roof installed. In fact, cosmetic work on the building is also well underway on the outside, with windows already installed on the eastern side of the building’s second floor, and insulating wall linings installed on the southern side.

The facade is yet to be installed on other sides of the building, but that is not as high up on the list of priorities as fortifying the building’s outer structure in anticipation of the upcoming cold weather in Germany.

On the inside of the building, all that’s left seems to be the laying of the final concrete floor, after which the interior will be ready for equipment installation.

All on-premises buildings seem to be well-outlined, which suggests we are currently in the tail-end of phase one. The swift pace of construction on Giga Berlin will undoubtedly give Tesla a head start on Model Y production — which will initially be the main focus of Giga Berlin.

Tesla CEO Elon Musk has spoken out in regards to his agreement to buy Twitter on the original terms, after news broke on Tuesday morning. Musk said just now, “Buying Twitter is an accelerant to creating X, the everything app.” When asked if it would be easier to build X from scratch, Musk replied, “Twitter […]
Sarah Lee-Jones
45 mins ago