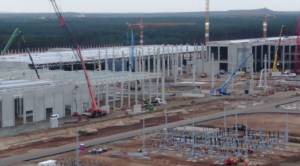 More progress is made on Tesla’s Giga Berlin construction site every week, and watching it all unfold has been exciting for enthusiasts of the electric vehicle (EV) brand.

The update includes new columns in the casting area, outer wall panels on the south side of the drive unit building, substantial paint shop progress, and a number of new storage containers with supplies.

The German Gigafactory plans to use both the 4680 cells with an updated structural battery pack, according to CEO Elon Musk.

My new time-lapse video from #Gigaberlin today in the evening hours.

As you can see, despite some misleading news today construction continued normal.https://t.co/KQd3q37KEM pic.twitter.com/iQN5jFOsj1

Earlier reports of Tesla not paying its water bill circulated rumors that construction would be stopped on the Berlin site temporarily, though Musk has apparently settled up with local utility officials without putting any real dent in progress.

Despite the potential slowdown and the criticisms of the locals, Tesla’s Gigafactory Berlin is set for completion next summer, with deliveries beginning in May 2021. Similarly, Tesla will also have its US Terafactory Texas completed by next summer, giving EV enthusiasts a lot of excitement to look forward to.

Tesla’s Model 3, Y and S units make up a market share of 26.33 percent of the electric vehicles (EVs) in Denmark, according to data shared by the Danish car imports trade association De Danske Bilimportører (via @Tesla Club Danmark). Out of a total of 105,379 EVs on Denmark’s roads, the data shows that Tesla’s […]
Peter McGuthrie
22 hours ago

As electric vehicles (EVs) continue to gain steam across worldwide markets, one European country known for early adoption of zero-tailpipe-emission vehicles has just reached a new record for single-day deliveries from Tesla. Tesla set a new daily record with 297 vehicles delivered to Norway in one day with Model Y cars from Giga Berlin, as […]
Peter McGuthrie
23 hours ago

Tesla adjusted its Supercharger pricing in Germany and some other European countries again, this time raising prices by six to nine cents per kilowatt-hour at each station, reports @Tesla_Adri, sharing screenshots from @ModelXOlli. Along with the news, Tesla Adri also shared screenshots of the Hilden Supercharger preview on the Tesla mobile app before and after […]
Peter McGuthrie
24 hours ago