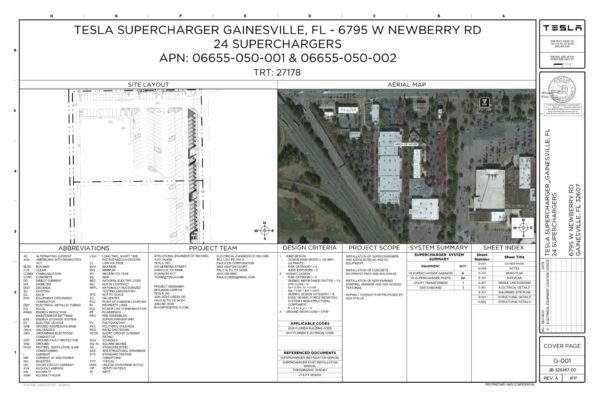 Photo: City of Gainesville (via MarcoRPTesla)

Tesla has submitted an application for Florida’s largest V3 Supercharger station, set to be installed in Gainesville, according to filings with the city, shares @MarcoRPTesla.

The Supercharger station will include 24 V3 stalls and will be built at 6795 W. Newberry Rd. at the Oaks Mall Plaza, right off of I-75.

Marco notes that all 24 of the V3 stalls will be built in an angled back-in fashion, which he adds should be convenient since there’s only a one-way aisle of the charging stalls, as can be seen in the top-down view of the site in the filing.

Tesla has also launched a voting system for new Supercharger stations in which users can suggest and propose locations for the charging sites, before voting on the top-proposed locations in three-month voting cycles.

Earlier this month, Tesla completed the world’s largest Supercharger station at Harris Ranch in California, including 98 total Supercharger stalls made up of 80 V3 stalls and 18 V2 stalls.