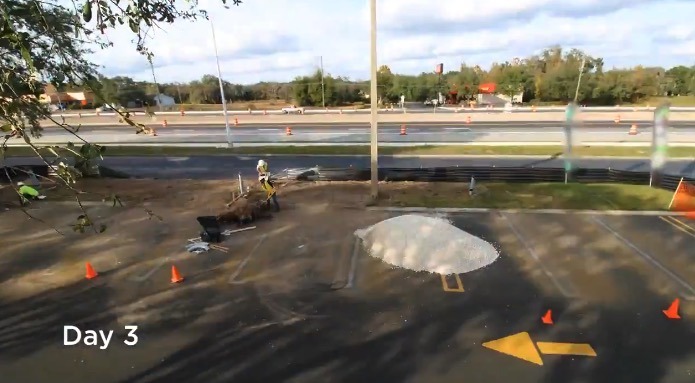 Tesla shared a video of a local crew deploying 12 Superchargers in just 8 days, at the Brooksville, Florida site.

These pre-made charging stalls are already connected to concrete slabs and have included transformers setup. Essentially, they just need to be put down and plugged into local utilities. It’s basically Superchargers in a box that can be deployed to any location quickly and easily.

After three days of prep, the ready-to-go Superchargers show up on day four, with a crane company lifting them off a truck. The Superchargers seen here have four charging stalls per pre-fabricated unit, making up for 12 total chargers at the Brooksville site.

The Supercharger in Brooksville is located at Sunrise Plaza, 31100 Cortez Boulevard, and has 12 Superchargers available 24/7, with V3 charging speeds (up to 250kW). Nearly amenities include Winn-Dixie, Beef ‘O’ Brady’s and King’s Wok.

Tesla highlighted its accomplishment on Tuesday of opening Supercharger stations to non-Tesla electric vehicles (EVs) across 15 European countries, which it says is equal to about 50 percent of Supercharging stalls in all of Europe. The announcement was made from the new @Tesla_Europe Twitter account. The Supercharging network is now open to all EVs in […]
Peter McGuthrie
20 hours ago

Indonesian President Joko Widodo said he is “confident” Tesla will finalize an investment into a production facility in his country, according to a report on Tuesday from Reuters. President Jokowi, as he is colloquially referred to in Indonesia, also highlighted potential benefits such as tax breaks for the company or a concession to mine nickel. […]
Peter McGuthrie
20 hours ago

Tesla is looking to increase production output at its Gigafactory Shanghai in the next two months, to help meet the demand created by its recent price cuts, according to a source with knowledge of the plan and a planning memo seen by Reuters. The memo says that Giga Shanghai is targeting a weekly average output […]
Peter McGuthrie
21 hours ago