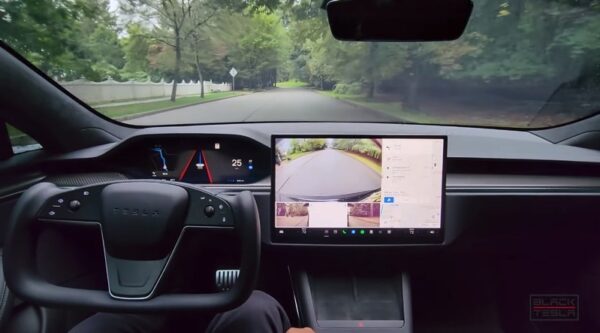 Tesla’s latest version of the Full Self-Driving (FSD) beta can detect certain kinds of Autopilot-defeat devices and the company plans to adapt the version according to new methods discovered over time, reports @Teslascope.

If detected using such devices, the FSD beta’s software version 10.69.3.1 will force Autopilot disengagement and it will result in strikes against the driver.

The outlet also notes that the wider release of version 11 is expected to remove the “strikes” system entirely, though using these devices will still cause Autopilot disengagement lasting until the next time a person drives.

Additionally, one user asked about vehicles that are on software version 2022.40.4.1 and if they’ll have to wait for the wider FSD V11 release. In response, @Teslascope confirmed that Tesla owners with this version will need to wait for the software to roll out to beta testers first, probably taking another week or two.

The news comes as Tesla begins rolling out FSD 10.69.3.1 to public beta testers who have paid for the feature. It also comes after CEO Elon Musk said the wide, single-stack FSD release was “several weeks away,” for U.S. and Canadian markets.

Earlier this week, @Musk also tweeted that the FSD beta was “now available to anyone in North America who requests it from the car screen, assuming you have bought this option.”

Investors just can’t get enough of Tesla’s stock, it seems. Around three million stock-option trades take place on an average day, and Tesla accounts for around 7 percent of all options on an average trading day, according to data from Cboe Global Markets, reports The Wall Street Journal. A stock option is a contract that […]
Peter McGuthrie
33 mins ago

Thailand has been one significant expansion project from Tesla in recent months, and now the automaker is launching some of its first fast-charging stations and a new retail store in the country. Tesla is preparing to launch the first V3 Supercharger station in Thailand, located on the B1 floor of the CentralWorld shopping complex in […]
Peter McGuthrie
24 hours ago