SpaceX Starlink Now Live Across All of Alaska, Complete Coverage is Here 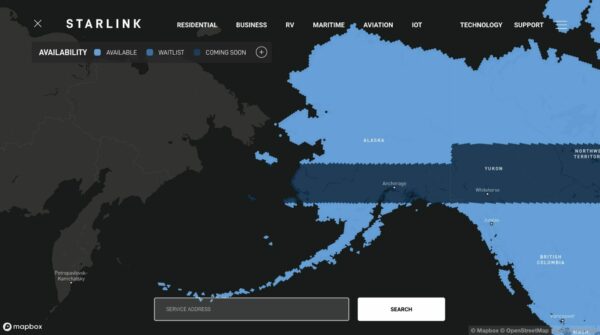 SpaceX has made Starlink fully operational across Alaska, closing a previous coverage gap that left Anchorage and many surrounding regions without service, as spotted by Tesla North reader @Nathan Owens.

Owens shared a screenshot of a Starlink order for an address in Anchorage, which was previously part of a coverage gap that covered much of Alaska north of the peninsula.

SpaceX will likely be updating the coverage map later in the day on Friday to include the change. Currently, Anchorage is in an area of Alaska that is noted as “coming soon”, defined by SpaceX as “pending service coverage or regulatory approval.”

Earlier this month, SpaceX expanded Starlink to other parts of Northern Alaska and Canada, as well as certain regions in Sweden, Japan and still elsewhere.

The news comes just weeks after SpaceX announced plans to launch a Fair Use policy on Starlink services in Canada and the U.S., adding a 1-terabyte data cap on residential connections to help create equitable internet access for all users of the service.

The Pentagon praised Starlink this week for improving communications in the Arctic, after SpaceX launched polar satellites in June that helped enable full Earth Starlink coverage.

Estimates from SpaceX in September held that Starlink would reach around 70-percent coverage in Canada later this year, just after the service had first become operational in Antarctica.