The Boring Company is planning to build a new underground tunnel project in downtown Austin, Texas, according to filings with the city — reports the Austin American-Statesman.

On November 3, The Boring Co. filed for a new project called the “Austin Loop Transportation System” at 400-512 E. Cesar Chavez St., which is the address of the Austin Convention Center. “The applicant is proposing new development with associated improvements,” the filing reads.

This new Austin project could be similar to The Boring Co.’s already operational underground transportation loop in Las Vegas, which is currently 0.8 miles long with three large stations but has been approved for a massive expansion.

Officials from Austin’s Development Services Department (DSD) visited the Las Vegas loop earlier this year in relation to Project Connect, a multibillion-dollar public transportation program funded by the state. However, a DSD spokesperson confirmed that the “Austin Loop Transportation System” is not part of Project Connect.

The Boring Co.’s filing didn’t reveal much about the Austin loop project. While it does indicate that proceedings for permits and studies for the project are ongoing, specifics such as the size of the project and the status of city/state approval and tunneling rights for the area remain unknown.

The Boring Company is a tunneling and infrastructure venture from eccentric entrepreneur Elon Musk. It aims to provide fast, alternative transportation in high-traffic areas.

Much like the rest of Musk’s companies, The Boring Co. has been working on expanding its footprint in Texas since moving its headquarters to the Sunshine State.

The Boring Co. is in talks with San Antonio to build transit tunnels between the San Antonio International Airport and downtown, and the company received approval to start engineering work on pedestrian tunnels in Kyle back in May. It is also building a test site in Bastrop County.

Other articles in the category: The Boring Company 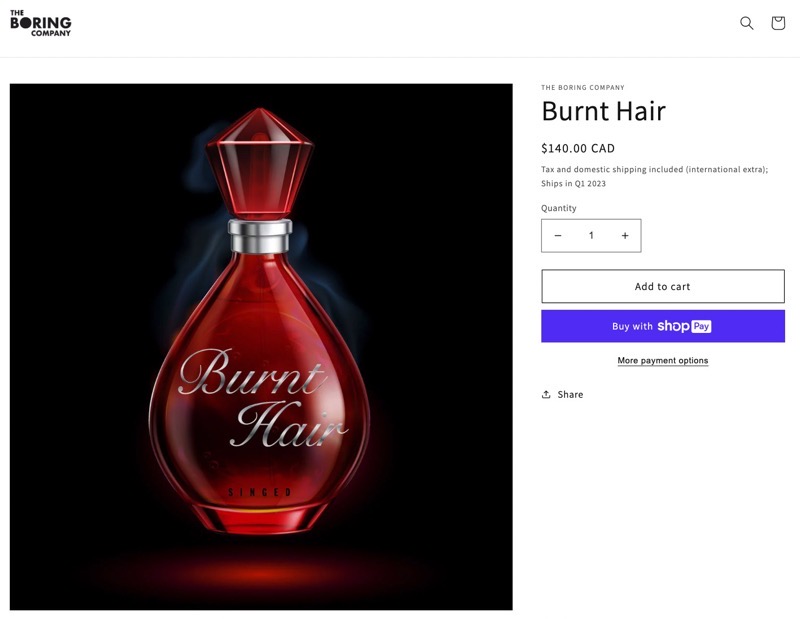 The Boring Company Has Sold 28,700 Bottles of ‘Burnt Hair’ Perfume in 1 Week: Musk

Elon Musk’s The Boring Company has launched a new fragrance called ‘Burnt Hair’, which the leader describes as “the finest fragrance on Earth”. The website describes Burnt Hair as “The Essence of Repugnant Desire,” while also shares testimonials for its scent, described as “Just like leaning over a candle at the dinner table, but without all […]
Sarah Lee-Jones
2 months ago