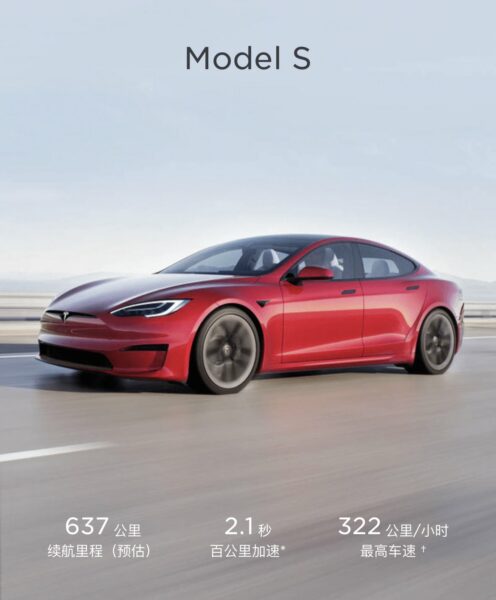 Two of Tesla’s upcoming arrivals in China have gained a vital tax exemption from the country’s ministry in charge of industry.

The Tesla Model S and X are now exempt from the vehicle purchase tax in China, as spotted on the Ministry of Industry and Information Technology’s (MIIT) catalog of new energy cars (via @JayinShanghai).

The Tesla models are joined on the document by a number of other “new energy vehicles” that have also been exempted from the tax in an effort to help increase consumer interest in low-emission alternatives.

The news comes just a day after the Model S Plaid was seen being unloaded from a trailer in China, lacking the ultrasonic sensors on the sedan built for other markets worldwide. Tesla said it would remove these sensors from the Model 3 and Model Y first this fall, followed by Model S and Model X in 2023.

Customers who have ordered the Model S and X Plaid in Europe have also started receiving calls about their orders in recent weeks, with estimated deliveries set to begin in November.

Tesla’s Model S Plaid is on display in the automaker’s exhibition at the Petersen Automotive Museum, featuring a vegan leather interior from designer Vicki von Holzhausen. The von Holzhausen vegan leather was designed in partnership with auto-tuning company and electric vehicle (EV) enthusiasts Unplugged Performance, first announced this summer. You can see the Model S […]
Peter McGuthrie
4 days ago