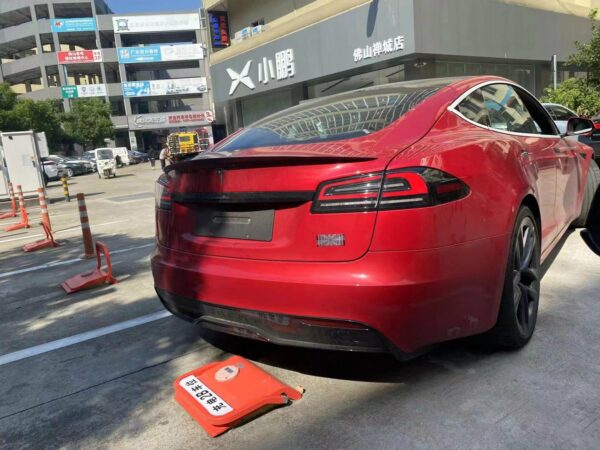 One electric vehicle (EV) that has yet to hit the Chinese market is the Tesla Model S Plaid, as the latter is currently only being made at the automaker’s Fremont plant in California, along with the Model X.

A Tesla Model S Plaid was spotted in China on Monday, as caught in photos and videos taken and shared by @Yan Chang.

Yan also noted that the scene may represent an official pre-test ahead of delivery, potentially suggesting that the EV is launching in the country soon. The vehicle could also be imported from the U.S., so it’s unclear at this point if this is an official delivery process.

In the photos, the red Model S Plaid bearing the plaid badge was seen being photographed by Tesla officials in front of an XPeng Motors storefront. A closer look at some of the pictures show the lack of ultrasonic sensors on the rear bumper.

Tesla said it would remove these sensors from the Model 3 and Model Y first this fall, followed by Model S and Model X in 2023.

BREAKING: The Model S Plaid was photographed for the first time in China, and I wonder if it's an official pre-test before delivery.@WholeMarsBlog @SawyerMerritt pic.twitter.com/LORd6yViho

Tesla also seemed to hint at the Model S Plaid’s arrival in China with a poster displayed at a delivery center last year, though it hasn’t yet launched.

In March, Chinese official Qin Gang took a trip to the U.S. and joined Musk for a ride in the Model S Plaid in Fremont, California.

The news also comes after Tesla hit record sales with 83,135 deliveries in September, primarily led by the Model Y SUV.

Tesla’s Model S and Model X electric vehicles (EVs) are sold out in Europe for the entirety of the first quarter of 2023, with estimated delivery dates for new orders being pushed to April-June from January-March (via @Tslachan).  $TSLA• Model S/X Europe's estimated delivery date has been changed from April to June. (Previously from January […]
Nehal Malik
4 days ago