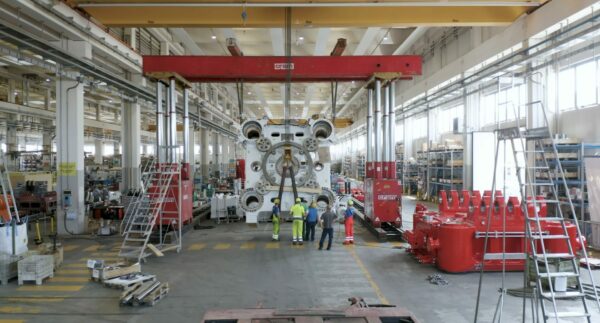 Tesla is preparing for the Cybertruck to come to fruition and the machine that’s set to make it has officially been completed, according to a new video.

Italian casting machine manufacturer IDRA has completed the Giga Press for the Tesla Cybertruck, as shown in a promo video by the company shared on Friday.

The video shows the machine in action, moving its huge casting press and how it will move once it begins being utilized by Tesla to build the Cybertruck.

IDRA has also made casting machines for Tesla’s other vehicles, creating huge, single-piece castings for the automaker’s car bodies for both front and rear. These single castings eliminate hundreds of parts and also results in a vehicle with better handling that’s also quieter. The process also saves Tesla time on the production line, allowing it to make more vehicles faster.

The Cybertruck is slated for production at Tesla’s Giga Texas location in 2023, and it will be die-cast using the 9,000-ton Giga Press machine. Prototypes of the Cybertruck have been spotted multiple times in the past few years.

First deliveries for the Tesla Cybertruck are estimated to arrive in mid-2023, according to recent statements from CEO Elon Musk.

According to info first discovered by ‘greggertruck’ on the Cybertruck Owners Club forums (via @ajtourville), ship tracking shows this 9,000-ton Giga Press for Cybertruck has already made its way to the House, Texas area, as of 8 days ago, after departing Italy on September 3. Documents show there are nine 20-foot containers. The cargo description is ‘Texas DCM’, or Texas Die Cast Mold.

Giga Texas drone pilot Joe Tegtmeyer said he has not seen the shipment yet, but won’t be hard to miss as it consists of 54 crates.

Tesla CEO Elon Musk replied to a story about the Giga Press being shipped to Giga Texas with, “can’t wait to see this beast in action!”.

You can watch IDRA’s full teaser video of the Tesla Cybertruck’s Giga Press casting machine below.