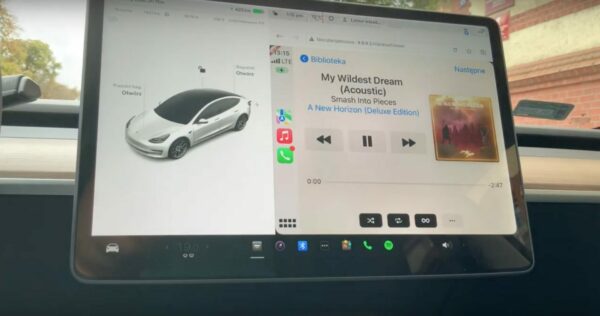 Tesla app version 2022.38.1 just went live for Android, and it includes a few updates set to make set up easier for Apple CarPlay.

The prior renderings of CarPlay also had content overlapping in audio apps, but the shift to an Android-based stack fixes the app’s resolution on the touchscreen. CarPlay also lets navigation sounds work when the Tesla browser is active.

As Gapinski points out, the update now runs CarPlay as a single-board stack, rather than having to run as a workaround from a third-party developer.

Tesla Apple CarPlay Hack Gets Update With Full Integration ‘For Any Tesla’ https://t.co/YrVtGqAuqd

Many Tesla drivers utilized a CarPlay hack using Android 12 which required the use of Raspberry Pi units, though the new update is hosted on Android itself and no longer requires the use of external hardware to run.

Tesla CEO Elon Musk also pointed out that Apple Music could be streamed using regular Bluetooth. However, CarPlay’s roll-out for other brands like Polestar also had some Tesla owners wanting the feature for themselves.

Apple CarPlay is also supported by other apps such as A Better Route Planner and Electrify America.

Tesla CEO Elon Musk said on Thursday the company has held talks with Apple for SpaceX Starlink connectivity for the iPhone. Just yesterday, Apple announced its new iPhone 14 lineup will support Emergency SOS with satellite, a feature that allows for communications when no cell signals or Wi-Fi is available. Apple is partnering with Globalstar […]
Sarah Lee-Jones
3 months ago