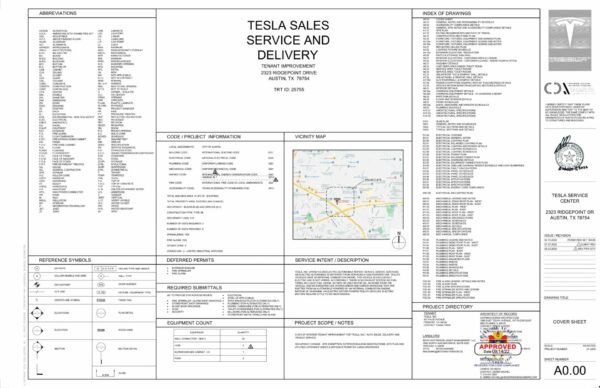 Photo: City of Austin (via MarcoRPTesla)

As Tesla’s service expands worldwide, the automaker is also increasing its presence near its headquarters in Texas.

Tesla is set to establish a sales and service center about 10 miles from its Giga Texas location, as seen in a permit with the city of Austin (via @MarcoRPTesla).

The permit, initially issued on June 15 with approval arriving on September 14, shows a 50,000-square-foot building, located at the intersection of highways 290 and 183 at 2323 Ridgepoint Drive near the factory.

It also shows images of the facility, which seems to include a small sales floor, a back service area and a large parking lot out front.

Here’s some info on a 50,000 sqft sales and service center coming soon to Austin, about 10 miles from GigaTX.@AustinTeslaClub pic.twitter.com/dmcfrxeX3S

The news comes just a month after Tesla launched its fourth showroom in Austin, located in northeastern Austin at the intersection of 290 and 183.

The automaker is also working on expanding its factory in Austin for multiple different projects, even as the location only opened for production earlier this year.

Tesla is planning to add a lithium refinery at its Giga Texas, and a major Megafactory battery storage at its Austin factory.

Another report from a few months ago said CEO Elon Musk was planning to build a private airport at Giga Texas, though Musk dispelled the rumors as false just days later.