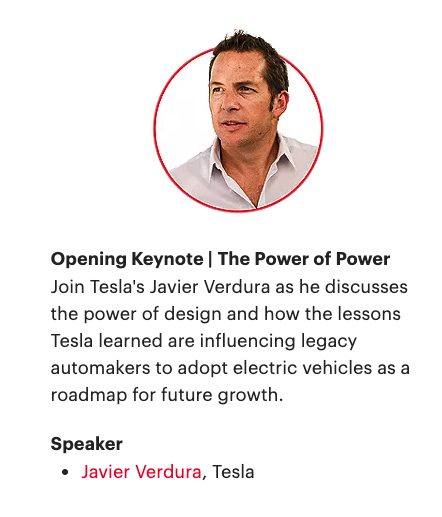 Photo: Keysight World (via Not a Tesla App)

As electric vehicles (EVs) become one of the world’s most significant emerging technologies of the modern age, one expo is set to honor that by inviting a Tesla executive to join as a keynote speaker next month.

The Keysight World Conference will have Tesla Director of Product Design Javier Verdura as the keynote speaker on October 7, the event’s fourth and final day which will be dedicated to EVs (via @Not a Tesla App).

On the event’s website, it says Verdura will talk about “the power of design and how the lessons Tesla learned are influencing legacy automakers to adopt electric vehicles as a roadmap for future growth.”

Tesla's Javier Verdura (dir of product design) will have the opening keynote at the Keysight World conference on October 7th.

It should be an interesting keynote. Day 4 of the conf will focus on EVs and the automative revolution.https://t.co/qlhY6w6ktF

The event will range in topics about emerging technology, including discussions on 5G and 6G, Quantum, and AI on days one, two and three, respectively. Other keynote speakers include Vivienne Ming, Shohini Ghose, Maurice Conti, Patrick Moorhead, Michael Grieves, Chris Gerdes and Pablo Tomasi.

While Tesla CEO Elon Musk has spoken at various events in the past, it’s less common for other executives of the automaker to speak at public events.

In June, Musk spoke at the Qatar Economic Forum, and he was the featured “Red Chair” speaker at last year’s Code Con with Kara Fisher.