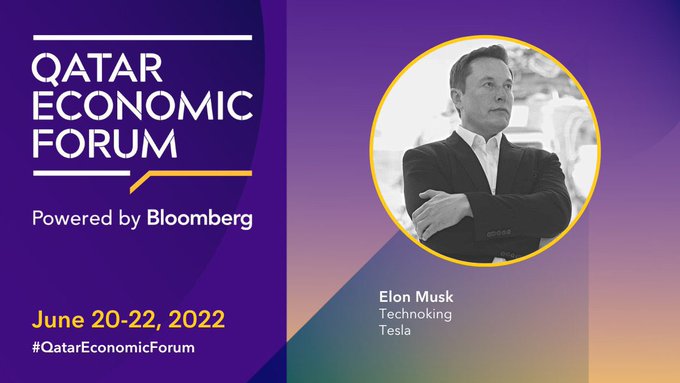 The Qatar Economic Forum is an annual gathering of world leaders and entrepreneurs organized by Bloomberg. For this year’s event, the organizers settled on the theme “Equalising the Global Recovery.”

The event will run from June 20 to June 22. Musk has been confirmed for a session dubbed “In Conversation With Elon Musk” on Tuesday, June 21. The celebrity billionaire will be joined by Bloomberg Editor-in-Chief John Micklethwait.

Heads of governments from across the globe, over 500 business tycoons, and more than 75 keynote speakers will be in attendance at the Qatar Economic Forum 2022.

Climate change and the world’s transition to clean, sustainable energy are expected to be key topics of discussion through numerous sessions this year. Tesla is at the forefront of the global effort to reduce carbon emissions and is pioneering sustainable transportation with its electric vehicles. In addition, Musk’s impending acquisition of social media platform Twitter may also come up in conversation.

Other critical areas of focus at the event will include the latest economic trends, lowering inflation, post-pandemic recovery, and more.

At the @QatarEconForum @business' EIC John Micklethwait sits down with @elonmusk to discuss his plans for @Twitter, @Tesla's relationship with China, and the 2024 US election. Live 6/21 at 9:10 AM AST! https://t.co/7sCbAJenuw #QatarEconomicForum pic.twitter.com/MBw2xieWuO

Musk will speak at 3:10 am EDT (6:10 am PDT) on June 21, with topics ranging from Tesla’s relationship with China to the next U.S. election, according to Bloomberg.

Among the notable executives from the automotive sector speaking, will be Herbert Deiss, CEO of Volkswagen AG.

The Qatar Economic Foundation has not confirmed whether Musk will attend the gathering in person or virtually, though it will likely be the latter. Check the Bloomberg link above as Musk’s talk likely will be live-streamed.

Long-term vehicle subscription service Autonomy has launched an end-of-year sale that lets users subscribe to a Tesla Model 3 for what it is calling the “lowest price anywhere” for the electric sedan. Customers need to put down a $3,000 deposit and then pay $450 per month for the first 12 months, said Autonomy earlier this […]
Peter McGuthrie
6 hours ago