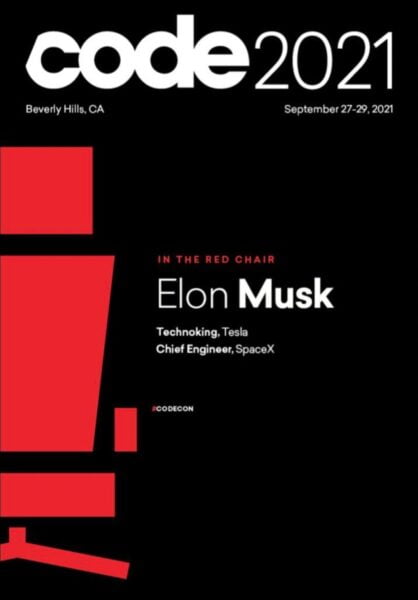 Tesla Technoking Elon Musk will be speaking at this year’s Code Con, set for September 27 to September 29 in Beverly Hills, California, according to @Carl Quinanilla. The conference is an annual, invite-only event, and it features unscripted interviews with leaders in business, surrounding the role of technology in the modern world.

Journalist Kara Swisher will be the interviewer, and Musk will be in the event’s red chair, alongside 13 other speakers including AMD’s Lisa Su, Neuroscientist Sam Harris, and NBA player and Thirty Five Ventures Co-Founder Kevin Durant, among others.

Code Con’s website says the event is “where Kara Swisher holds the power players of tech accountable in signature unscripted Red Chair interviews.” It continues further down, saying, “Code 2021 will address the role of tech in our new reality: the hottest IPO market since 1999, the development of a vaccine in record time, antitrust lawsuits against Google and Facebook, China, climate change tech, and so much more.”

The announcement comes just on the heels of Tesla’s AI Day, in which it unveiled its D1 Supercomputer chip, in addition to a nonchalant announcement from Musk of the Tesla Bot Humanoid Robot, set to see a prototype as soon as next year.

According to Musk, the bot will be “friendly” and it “eliminates dangerous, repetitive, boring tasks.”