Tesla Expands Self Diagnostics Feature to Include Vehicle Range Concerns 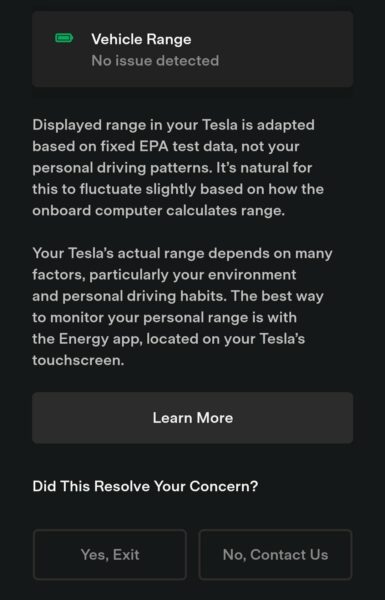 Since rolling out a new self-diagnostics feature for service appointments back in July, Tesla has already made some improvements to the tool in the mobile app.

Tesla’s internal app strings seem to show that the automaker expanded the self-diagnostic feature to include battery range concerns as spotted by @tesla_adri.

The app also added a question at the bottom with the ability to answer yes or no, asking users, “Did this resolve your concern?”

The page also includes a “Learn More” button to open related support pages from the company.

To see the self-diagnostic page, users must choose service, request service, battery then range, and you can trigger the self-diagnosis on battery range by typing “range loss” into the search field.

Update: According to Tesla owner @Brandonee916, he just tried this self-diagnostic feature for vehicle range. He said Tesla customer support called him and told him his battery retention percentage for his 2018 Model 3, at 82.5%.

I just tried it and received a direct call from Tesla Customer Support… they reviewed a bunch of metrics from my battery and let me know my battery retention is sitting at 82.5%… not bad for a 2018 🎉 https://t.co/kiBw27VsO6

A rumor from February holds that Tesla could be working on an App Store in its cars, not unlike the Apple App Store or Google Play store you’d find on most smartphones.

Take a look at all of the new Tesla Superchargers that went live across the globe this past week, courtesy of data from Supercharge.info and the TMC Forums: Date Opened Location Number of Stalls Power Rating Official Listing September 26, 2022 2 Rua do Miradoiro, Vigo, Pontevedra, Spain 12 250 kW Tesla September 26, 2022 Strevelinsvej 13, […]
Nehal Malik
6 hours ago

As China celebrates its legal holiday of National Day this week, Tesla’s Gigafactory Shanghai will stay open with some added benefits for employees who work for the holiday. Tesla’s Giga Shanghai is remaining operational during China’s National Day holiday running from October 1 to 7, as reported by a source familiar with the matter reporting […]
Peter McGuthrie
15 hours ago

Tesla is looking to expand Gigafactory Nevada after years of announcing plans to do so, according to sources familiar with the matter reporting to electrek. Past statements by Tesla held that the Giga Nevada location would be able to produce around 105 GWh of battery cells per year and 150 GWh of battery packs per […]
Peter McGuthrie
16 hours ago