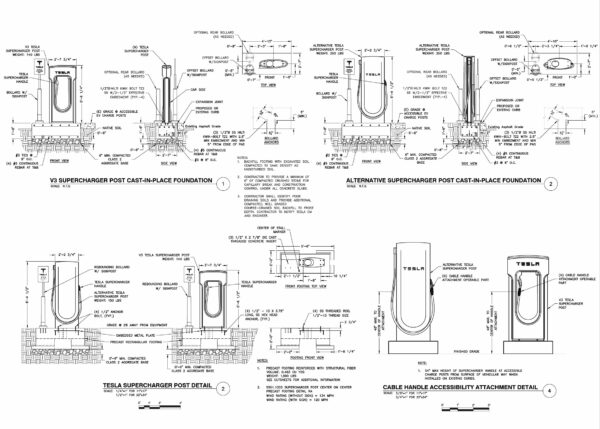 After Tesla’s upcoming V4 Supercharger dimensions were revealed earlier this month, the automaker has dropped another potential hint to suggest it may start deploying its next-generation charger design.

A Tesla Supercharger site set to be established in Danvers, Massachusetts shows “Alternative Supercharger Posts” alongside its V3 Superchargers, which could mean that V4 Supercharger designs or another new piece of Tesla hardware is on its way (via @JH_bedford).

In a photo shared on Twitter on Wednesday, we can see Tesla’s blueprints for the automaker’s slightly thinner V4 design, as shown alongside the company’s current V3 chargers.

Tesla supercharger site plans for Danvers, MA appear to now include references to "Alternative Supercharger Posts" in addition to v3 posts. This is probably still a v3 build, but this suggests v4 sites are on the way 😍

Some users in the thread also noted that the Alternative Supercharger Post could be a Tesla Semi charger, rather than a V4 Supercharger. But Supercharger sleuth @MarcoRPTesla says it’s a Supercharger design.

A report from the White House also suggests that Tesla’s Superchargers will open to non-Tesla EVs by the end of this year.

One Tesla Semi was seen delivering pre-fabricated Superchargers to the raceway at Laguna Seca at the end of last month, adding a total of eight new charging stalls.

Tesla’s newest Superchargers also arrived as recently as the past few weeks, with the Massachusetts station set to gain the chargers in the coming weeks.

If you’re a Journie rewards member in B.C. or Alberta, Canada, you can get free electric vehicle charging for a limited time at On the Run convenience store locations. These On the Run EV charging stations are set to be one of the “largest planned ultra-fast charging networks capable of charging most EV models in […]
Sarah Lee-Jones
4 hours ago

Plugin vehicle shares in the UK reached 22.4 percent, up from 21.6 percent year over year, according to CleanTechnica. The figure is made up of battery-electric vehicles (BEVs) at 16.9 percent and plugin hybrid electric vehicles (PHEVs) at 5.5 percent of the overall market share. A year ago, these figures landed at 15.2 percent and […]
Peter McGuthrie
8 hours ago

Since entering the Australian market in August, the Tesla Model Y has been making waves, with many customers flocking toward the electric SUV in recent months. Tesla delivered 4,359 Model Y units in Australia in September, as reported by The Driven. The figure nearly doubles the next top-selling EV in the country, showing a dominant […]
Peter McGuthrie
8 hours ago