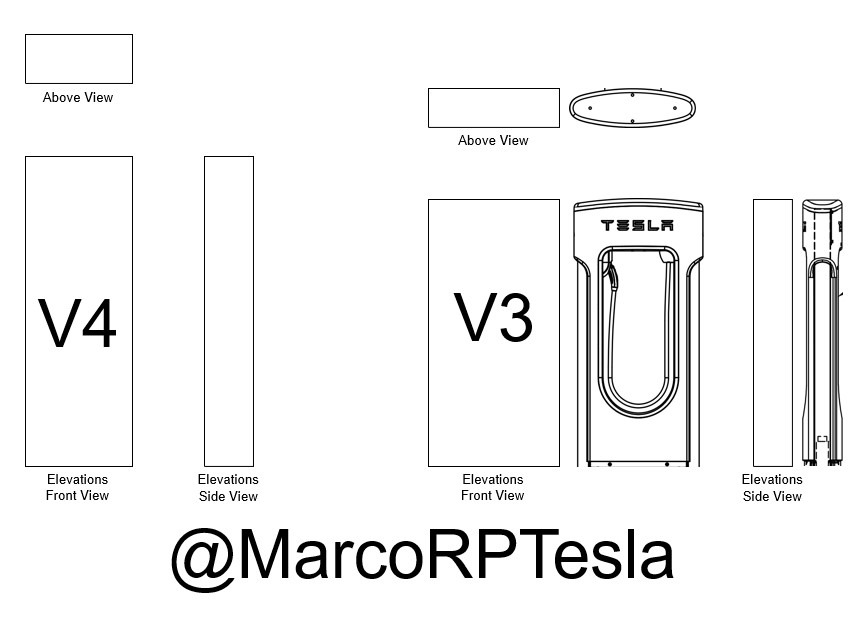 According to a previous report, Tesla plans on debuting V4 Supercharging hardware sometime in Q3 this year. We’ve only gotten dimensions so far, and the actual design of Tesla’s V4 Superchargers remains unknown.

As for the V4 design, it looks like Tesla will be using a different shell than the current V2 and V3 models.

While I have yet to determine the new shape, I was able to find the dimensions so that it can be compared to the current model. pic.twitter.com/QQhtDgHfCJ

Tesla last year announced existing V3 Superchargers would be upgraded to deliver charging speeds of up to 300 kW, up from 250 kW originally.

A January report indicated North American Superchargers would be further boosted up to 324 kW (or possibly even 370 kW), so it will be interesting to see what kind of power output the next generation packs.

Tesla is also gradually opening its Supercharging network up to other electric vehicle brands, an initiative the company started rolling out last year.

The previous week was pretty big for Tesla on the Superchargers front. The company closed out the quarter with a whopping 42 new Supercharger locations across the globe.

Tesla Model Y buyers in Australia could bring the SUV’s price down by as much as $10,000, making it as affordable as the Mazda 3 with a new tax deal, according to The Driven. To achieve this level of savings, buyers must qualify for a combination of incentives including the country’s new fringe benefit tax […]
Peter McGuthrie
2 hours ago

Update: According to Electrek, the site claims Annex is not a real company and the so-called Tesla deal is actually fake. U.S. automaker Tesla is preparing to take hold of its own semiconductor chip supply in China, with a new partnership surfacing to help increase electronics supplies. Tesla is partnering with Swedish chip manufacturer Annex […]
Peter McGuthrie
4 hours ago

A revamped Model 3 is under development at Tesla, according to four people familiar with the plans in a report from Reuters on Monday. The updated model, dubbed “Highland,” is expected to decrease overall complexity and reduce the number of components in the Model 3’s interior. Additionally, the new Model 3 will focus on factors […]
Peter McGuthrie
4 hours ago